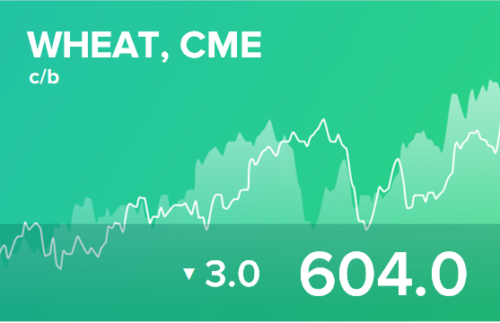 Biden can celebrate. Is his victory easier for the rest of the world?

Taking into account the fact that with his arrival the markets assess the prospects of the dollar in a negative way, it is enough to look at the behavior of the euro and gold, it will become somewhat easier for many countries with dollar debts. Those who have collected the reserves of this currency, China and Japan, will have to be ready to come to terms with losses.

With the arrival of the Democrats, the grain market should become more elastic, which implies smooth, free from strong jumps in price changes.

The United States, now clearly, will come under the control of a cohort of individuals, rather than one person who frightens the world through Twitter. All reasonable humanity counts on the fact that Biden, due to his age, will be a waxwork, but not a person with real power. Otherwise, Trump’s reign will seem like a cute prank to the World.

By reading our forecasts, you could have made money in the natural gas market by taking a move up from 2.450 to 3.080.

We can say that the Democrats won the day because leaders of the world’s major economies began to congratulate Joe Biden.

What this should lead to: «green» energy will be given the green light. Europe and the United States will follow the path of reducing atmospheric emissions. At the same time, at every opportunity they will trigger China, the number of dirty industries in which is extremely large, forcing it to rebuild.

The development of alternative sources will lead to the fact that despite the growth in energy consumption, doubling by 2050, the demand for oil will either stagnate or decrease by 1 million barrels per day every next year.

Based on the current situation, we can say that the virus is stifling oil prices. We are waiting for any comments from OPEC in mid-November, and possibly action.

In connection with the election of Biden, traders are betting on the weak dollar. Democrats are inclined towards stronger quarantine measures and more extensive aid programs, which means more currency issuance.

There is little threat to the ruble in the near future from the United States, Biden’s inauguration should take place on January 20, 21st year. There is still a month for the buildup, but by the end of winter there may be some supply. But in today’s rapidly changing world, four months is an eternity.

It will not be surprising if the national currency strengthens to 72 rubles per dollar in the coming month. 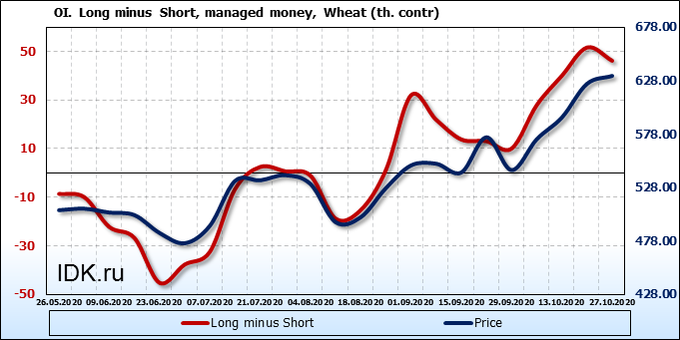 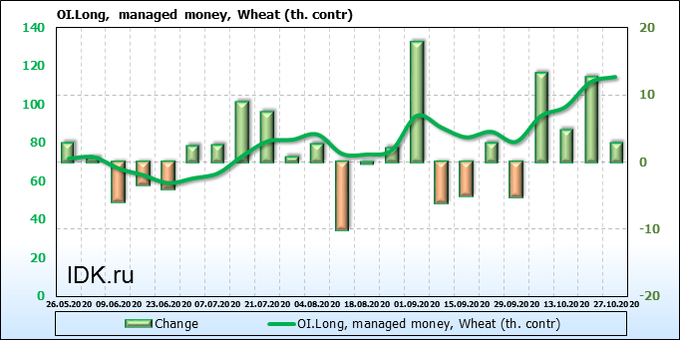 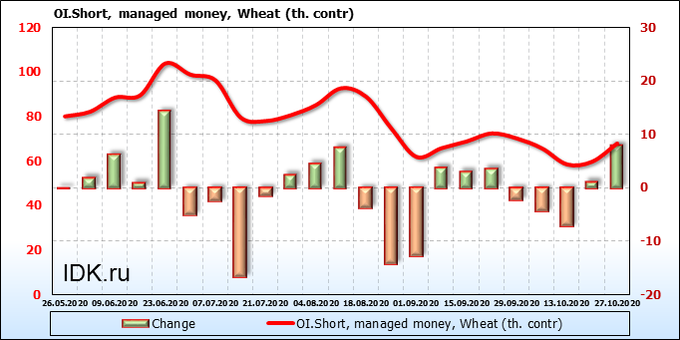 Trump’s departure from the political scene could ease some of the anxiety. We have the right to count on a correction to the current growth in the wheat market, especially since the activity of sellers is clearly growing.

Growth scenario: December futures, expiration date December 14. Judging by the Thursday candlestick, whose long shadow is mesmerizing upward, as well as the emerging wave pattern, we can assume that prices in the market will fall to 560.0 cents per bushel. We do not buy.

Falling scenario: does it make sense to try to take the move from 602.0 to 560.0 on daily intervals? Most likely not, because due to the high volatility in the market, the stop order will have to be placed very far away, which makes the trade worthless due to the poor profit/risk ratio. Thus, we will enter short only when the quotes rise to the 620.0 area, but not at the current prices. 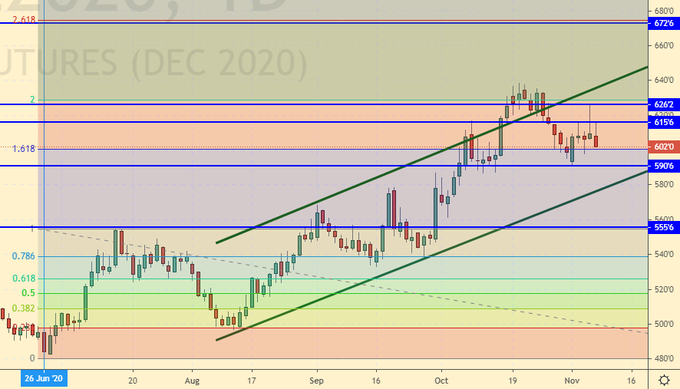 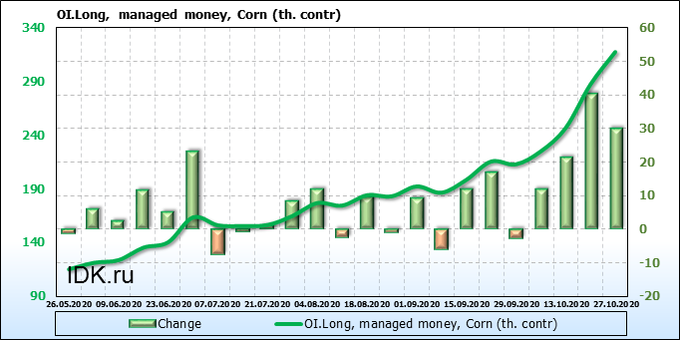 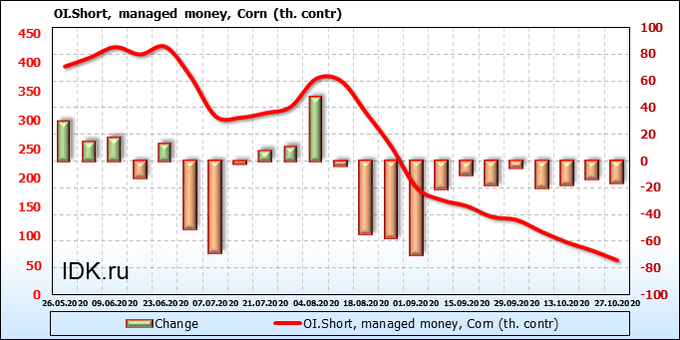 Bulls hold the market for now. However, a weak Thursday and last week’s Red Friday may cause them to retreat. Buyers have been building up the pressure for 4 weeks. It’s time to take a break.

Growth scenario: December futures, expiration date December 14. We hold the current longs, don’t open new positions. Prospects for visiting level 430.0 remain. Stronger growth is not visible in principle. Falling scenario: in general, a sell entry from the current levels is possible, however, due to intelligent maneuvering, it is worth trying to get as high prices as possible while we stay below the level of 418.0. The second option for entering a short is the moment of approaching the level 430.0. 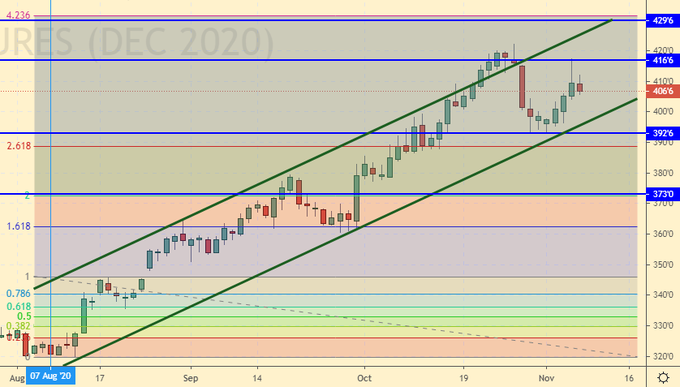 Growth scenario: January futures, expiration date January 14. Good week for the bulls. The target at 1173 remains. We keep longs. There is nowhere to open new positions.

Falling scenario: nothing has changed for the sellers. We continue to wait for prices to approach the 1170 area. We do not believe in a downward reversal from the current levels. 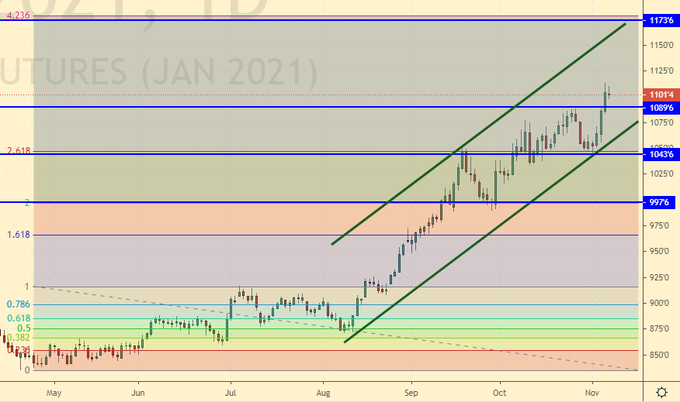 Growth scenario: March futures, expiration date February 26. No change here. The target at 15.95 remains. Let’s leave the stop in place for now. The current confusion is somewhat troubling, but everything should end well: we will reach 15.95.

Falling scenario: the idea is the same, we will sell when we approach the area of 16.00, not earlier. Recommendation: 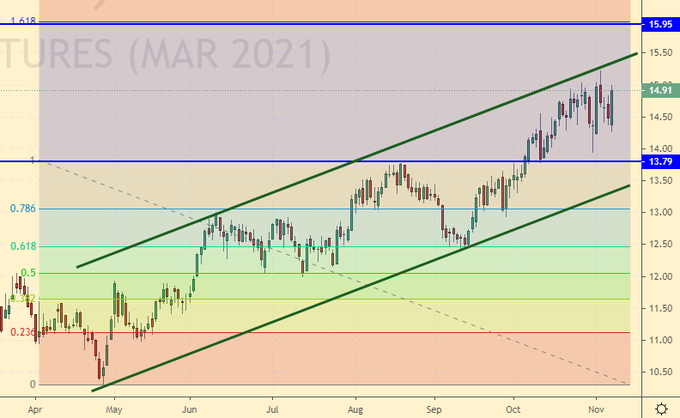 Growth scenario: December futures, expiration date December 18. Buyers supported the market at 102.0, however, we cannot talk about buying yet. We need a price rise above 110.0.

Falling scenario: sell from current levels? Risky, but the profit / risk ratio is not bad. You can try. 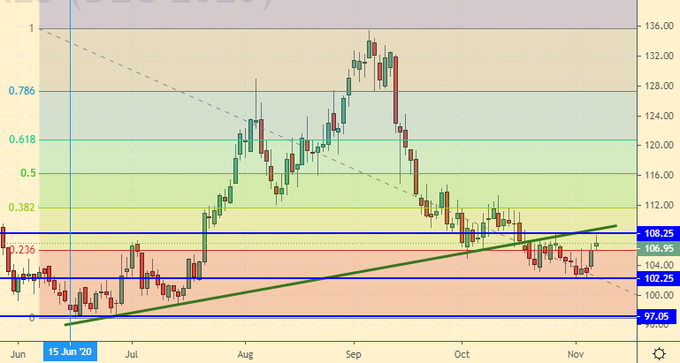 Following Europe that went into strict quarantine, the bears attacked the oil market. We perceive the current upward bounce as a convenient opportunity to enter short.

Growth scenario: November futures, expiration date November 30. Let’s be patient. Let’s be careful and wait for the breakdown of the 42.00 level or the market will go down again. Out of the market so far.

Falling scenario: previous shorts were destroyed by a too abrupt recovery. It’s okay, we go in short again. It is not fundamentally clear how the oil market will grow in the near future. 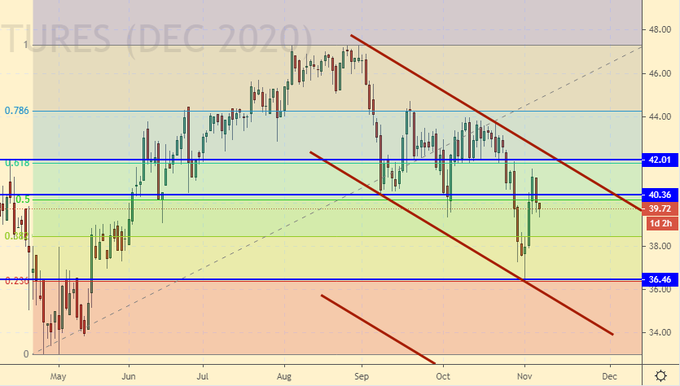 Fundamental US data: the number of active drilling rigs increased by 5 units to 226 units. 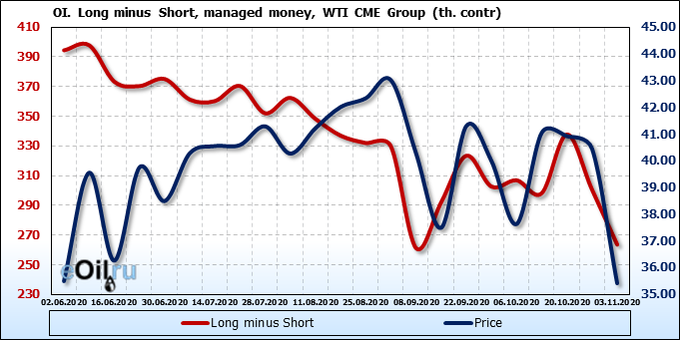 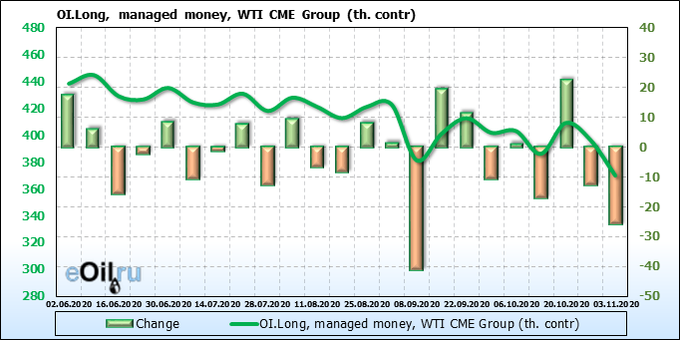 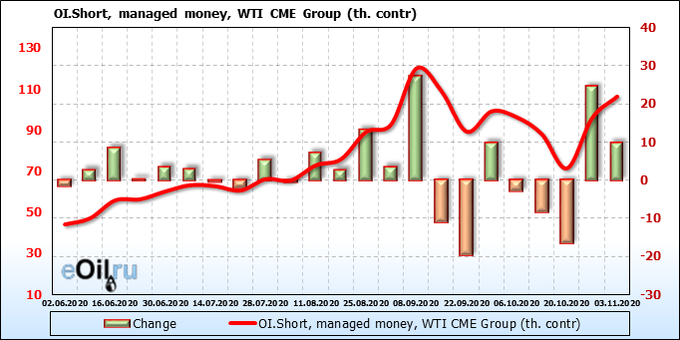 Sellers have become more active. This is partly a bet on Biden’s victory, partly this is an understanding of the problems of reducing fuel consumption due to the virus. Therefore, we look at the current upward rebound with skepticism.

Growth scenario: December futures, expiration date November 20. If you get tied up into longs as you approach 34.00, place a stop loss at breakeven and wait. It is possible that the market will take the 40.00 area and move higher. We must admit that this behavior of the oil market will come as a surprise to us. We recommend opening new longs only after a rise above 40.00. It is advisable to have an appropriate news background.

Falling scenario: the market has demolished stop orders. Nevertheless, we go into selling once again with the expectation that the bulls will simply have nothing to offer in the near future. 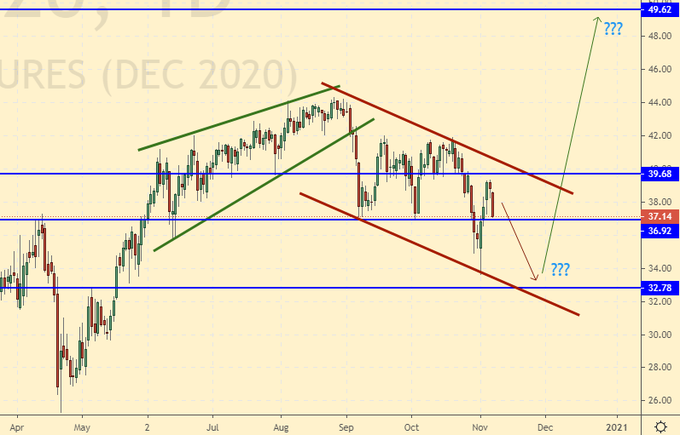 Growth scenario: December futures, expiration date December 10. Fuel prices will be under pressure as many countries impose strict quarantines. We do not expect growth above 340.0. If this happens, you might want to consider shopping.

Falling scenario: we continue to keep the shorts counting on a deeper fall in the market. Those interested can add here. We have the right to expect a fall to 280.0, and possibly even lower. Recommendation:

Purchase: think after rising above 340.0. 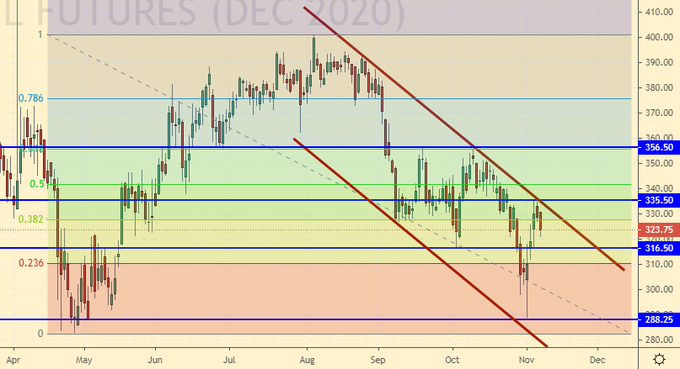 Growth scenario: December futures, expiration date November 25. In Europe and in the USA, warm comfortable weather with temperatures of +10 — +20 degrees Celsius during the day has been established everywhere, which reduces gas consumption. Prices failed to cope with this fundamental factor and decided to take a break. Our stop loss at 3.080 was not superfluous.

Falling scenario: sorry, we didn’t see the 3.530 mark. The current sales levels are understated. We take a break. 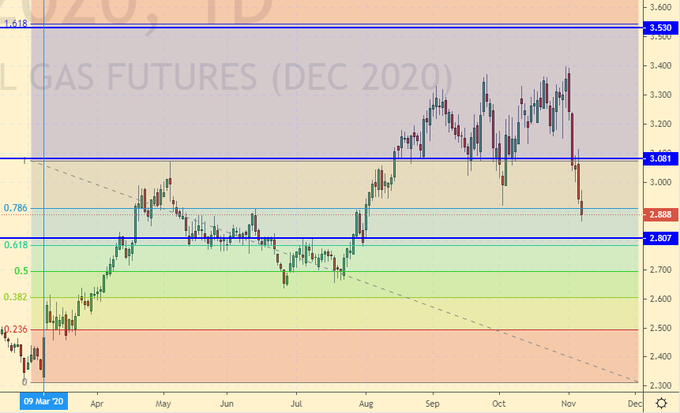 Growth scenario: I want to believe that we have left the correction channel and headed to 2260. If there is a rollback to 1920, buy (add) is obligatory.

Falling scenario: postpone talking about shorts for now. Biden is synonymous with a weak dollar. We do not sell. 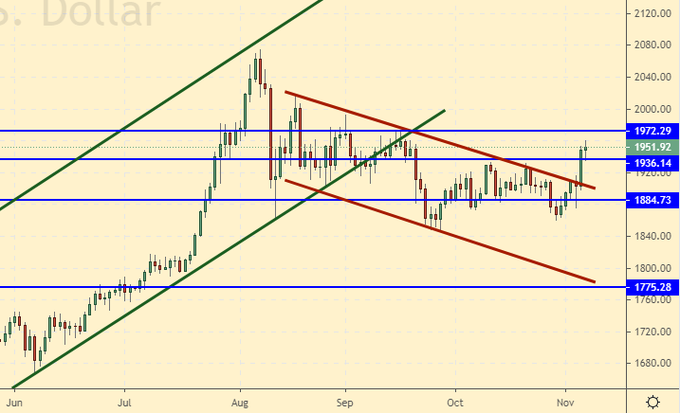 Growth scenario: in order to consolidate the success, the bulls need to push the market above 1.1900. It is quite possible to do this on Monday. We believe in continued growth.

Falling scenario: Biden’s victory pushes the pair up for now. Will there be cooling, for example, in the region of 1.2000? This is an extremely difficult question, since now a lot will depend on what this gray-haired gentleman will say in public. We don’t believe in short yet. 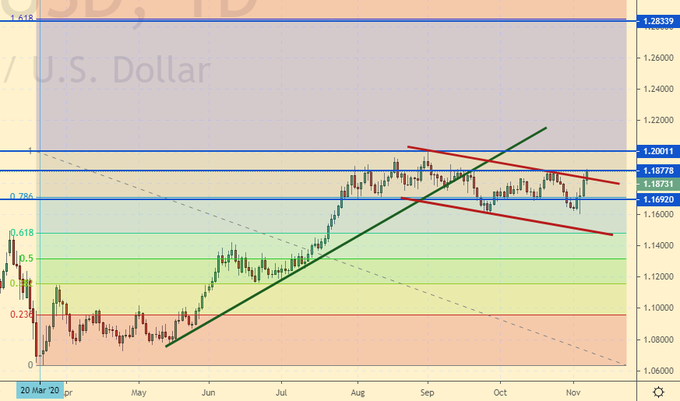 Growth scenario: forecasted dollar weakness under Biden contributed to the fact that we saw a sharp strengthening of the national currency. We don’t think about buying yet, the downward movement was too sharp.

Falling scenario: it is likely that a “thorn” pattern is forming in front of us. If prices pass the 75.80 level without recoil, then serious prerequisites will arise for the pair to fall to the spike height, which is 5 rubles, that is, to the 71.00 area. I would not like to miss such a move, I would have to sell at 75.80. 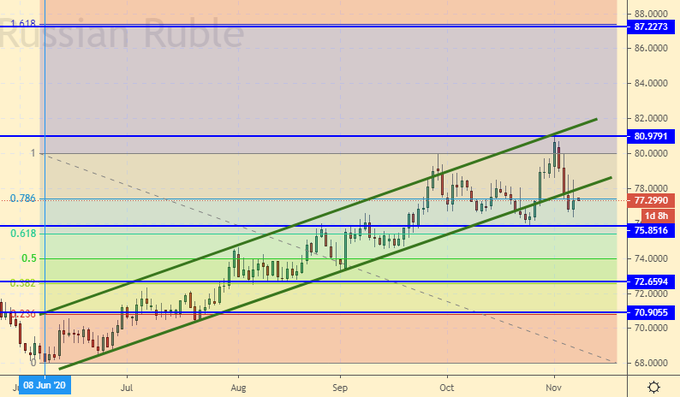 Growth scenario: December futures, expiration date December 17. Let’s be honest, Russian industry is unlikely to flourish with the arrival of Biden. In the global industrial scheme, and Democrats in the US are much more zealous globalists than Republicans, Russia’s role is to supply resources. Attempts to recreate their own aircraft industry, or to develop space programs, robotics and other goods with high added value will face the artificial closure of international markets in the form of sanctions and other obstacles. Therefore, we are cautious about the current growth of the stock market.

Falling scenario: we are unlikely to turn down sharply next week. Unless oil begins to decline at an accelerated rate, and Biden does not begin to intensively throw mud at Russia. Therefore, we are not yet short. We take a break. 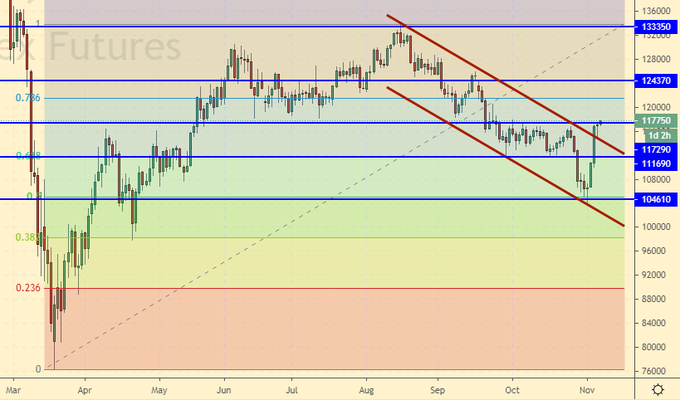