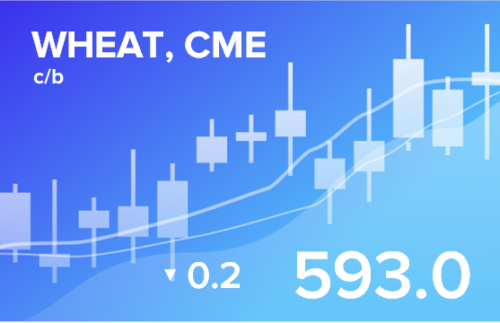 The grain market is strong. Wheat is below the 600.0 level, while corn is growing moderately with no plans to visit 435.0 cents a bushel.

Increased demand for feed from China and Europe, coupled with a sharp drop in the actual corn harvest in Ukraine by a serious 8 million tons, which is 22%, forced grain prices to remain at high levels.

Reports of positive testing for a number of vaccines led bidders to be positively charged. There are no prerequisites for a drop in demand now, but there are prerequisites for a poor harvest in 2021. Particularly, due to the La Niña effect, which will dry up the entire south of the United States next summer. This could lead to a stronger rise in prices next year.

The community of traders and investors is positive about the prospects for a recovery in oil demand in connection with the start of mass production of vaccines against the coronavirus. Bright hopes are pushing oil prices up.

If we rely on the end of trading on Friday, when we closed above 45.00, we can talk about a very likely move to 50.00 in the next two weeks, should be in time just in time for the annual OPEC meeting, which is scheduled for December 1st.

What can prevent oil from climbing above 50.00? Only Biden’s harsh verbal comments. The new president, and apparently, it will be Biden, since all Trump’s appeals ended in nothing, is able to put the United States in strict quarantine for two or even three weeks immediately after taking office on January 20th.

The government exceeded its borrowing plan for the 4th quarter by 10%, raising 2.2 trillion rubles, and sharply dropped the volume of OFZ sales, from 300 to 60 billion rubles per week. It is possible that borrowing will continue with an eye to 2021, since problems in the economy remain.

At most, Russia will be saved with oil at 80.00, but when and whether it will be. In other cases, you will have to borrow.

The talks about granting a residence permit in exchange for 10 million rubles of investments in the economy can be viewed positively. This at least suggests that there is an understanding of the need to improve the investment attractiveness of the country.

The ruble is still in the area from which it would be comfortable to strengthen to the level of 73.00. The reversal of the pair from the current levels upwards will look ugly.

It is likely that Biden will come to power, the electoral vote is scheduled for December 14th. The Democratic candidate has said more than once that he will increase the stimulation of the economy, that is, the distribution of money, and this will lead to a weakening of the dollar. In this case, the ruble will be able to strengthen somewhat. 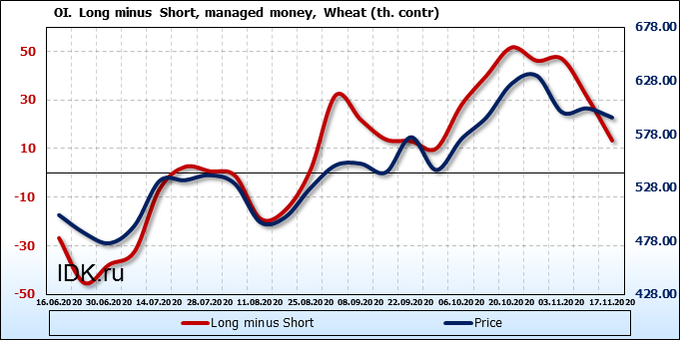 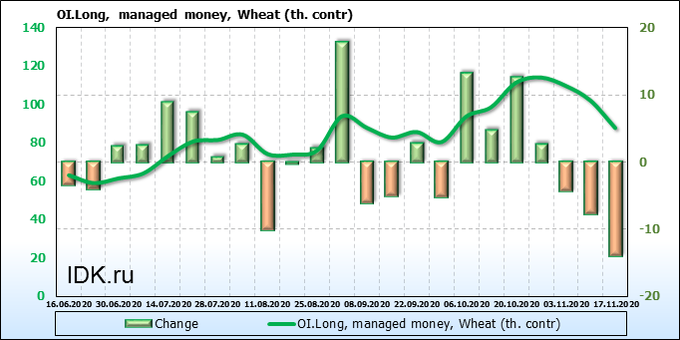 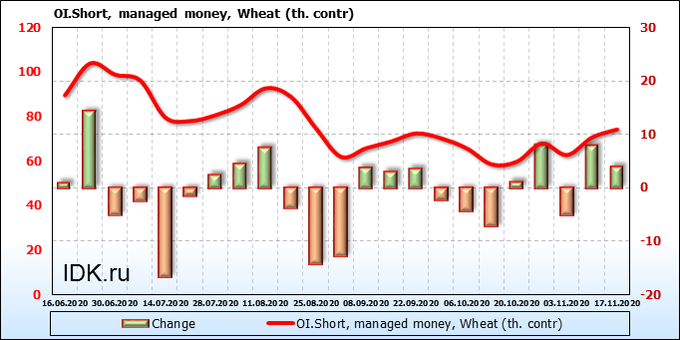 Bulls-speculators have been cutting their investments in wheat for three weeks in a row. Most likely, next week this will lead to the exit of prices from the growing channel downward, and then a quick rollback to 560.0 will follow.

Growth scenario: December futures, expiration date December 14. For now, we tend to believe that a breakdown will take place. Only after the prices go down to 560.0 it will be possible to buy.

Falling scenario: if prices touch 585.0, then you can go short. Entering on a breakout is not a good thing, but in this situation you can afford it, especially if you don’t put your stop far. 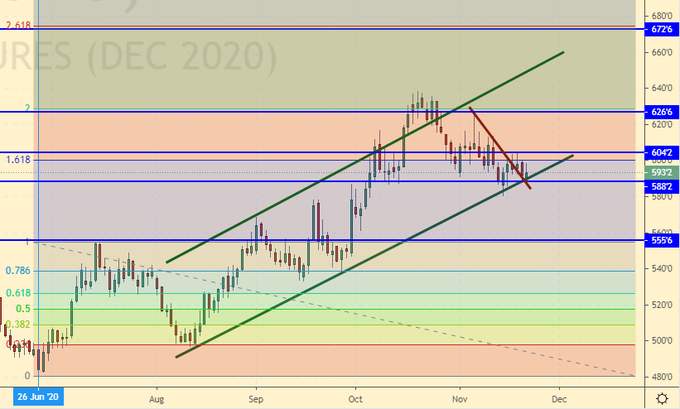 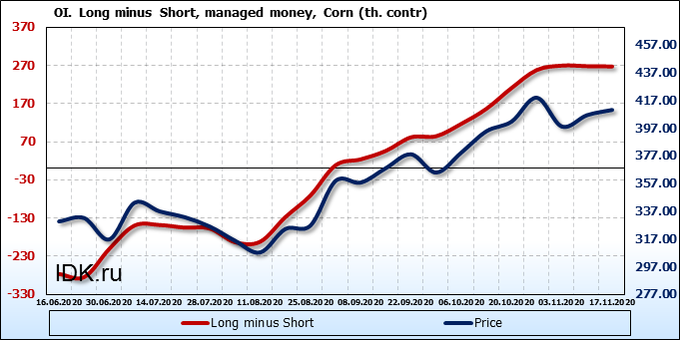 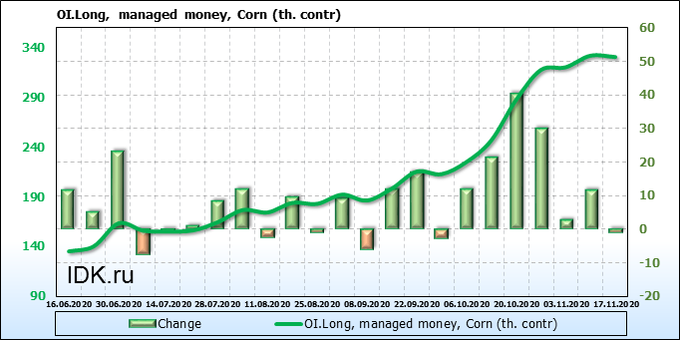 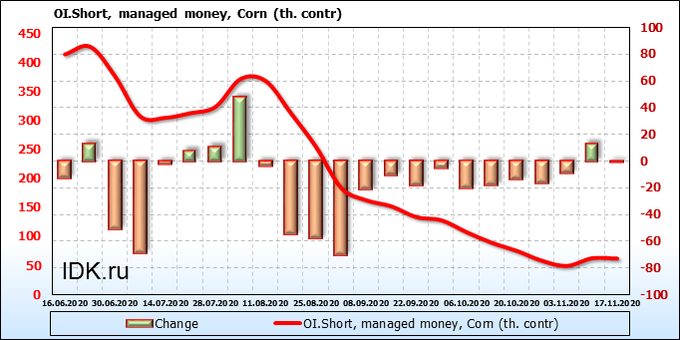 Customer enthusiasm is dying. The growth of recent days is not supported by the flow of money. The market should start turning down soon.

Growth scenario: December futures, expiration date December 14. If the market hits 430.0 without prior deep correction, it will be a surprise. We do not open new purchases. We believe that we are in the area from which there should be a pullback downward.

Falling scenario: keep your shorts here. Selling at current levels is possible. We believe in a corrective move. 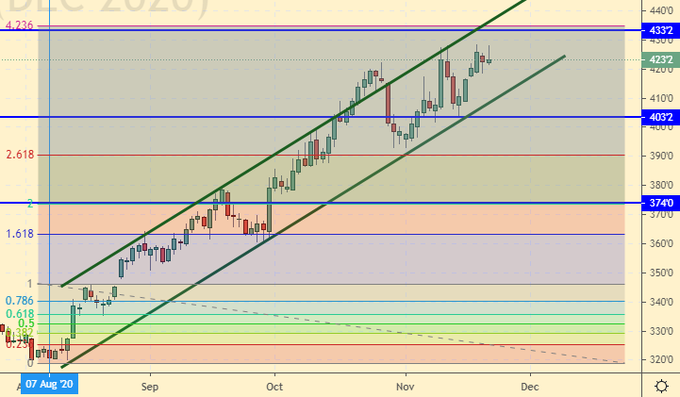 Growth scenario: January futures, expiration date January 14. Soy has accelerated and cannot stop. The growth above 1175.0 came as an unpleasant surprise. We want to see a rollback, but there is none. We do not buy. We need to understand what’s going on.

Falling scenario: we will sell again thanks to the long shadow and small body of the Friday candlestick. We are high, the market is overbought. The rollback will benefit everyone. 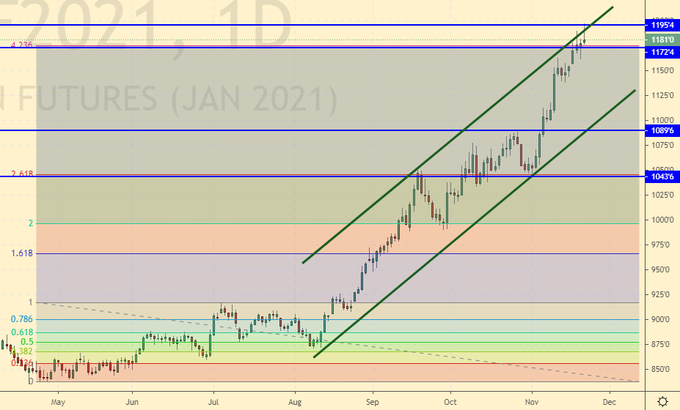 Growth scenario: March futures, the expiration date February 26. We go to the area 16.00. Let’s not interfere with the market and be patient.

Falling scenario: the idea is the same, we will sell when we approach the 16.00 area. The current reset is already unnerving, but let’s hope we climb a little higher. Recommendation: 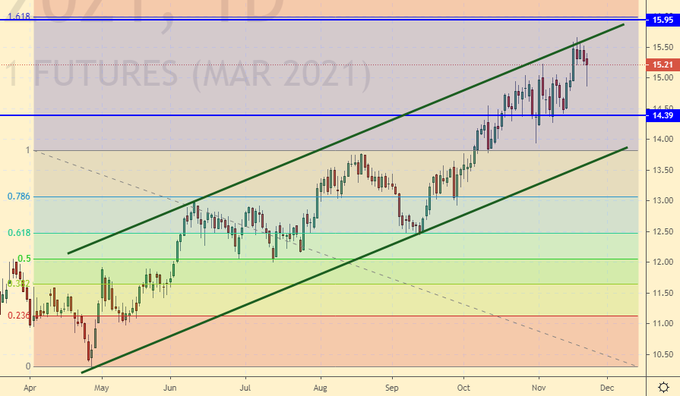 Growth scenario: December futures, expiration date December 18. We quickly went above 110.0 and rolled back. The current situation is quite favorable for increasing longs with targets around 140.0. The emergence of vaccines should, in the long term, increase demand from food service outlets.

Falling scenario: we will not sell despite the fact that Friday’s candle looks threatening. The sales situation is awkward. It will be another matter if we return to the 120.0 level in the future. 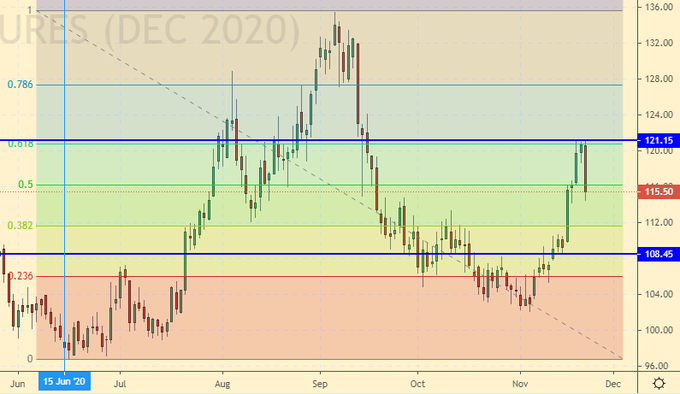 For the second week in a row, buyers continue to increase their activity, while sellers, on the contrary, are losing their positions. This has already led to a rise in prices in the market, and there are assumptions that the end of the growth is still far away.

Growth scenario: November futures, expiration date November 30. It is necessary to keep the longs opened earlier. Can be added after rising above 45.00, with an eye on the area of 50.00.

Falling scenario: looking at the optimism prevailing in the market over the past week, do not buy. 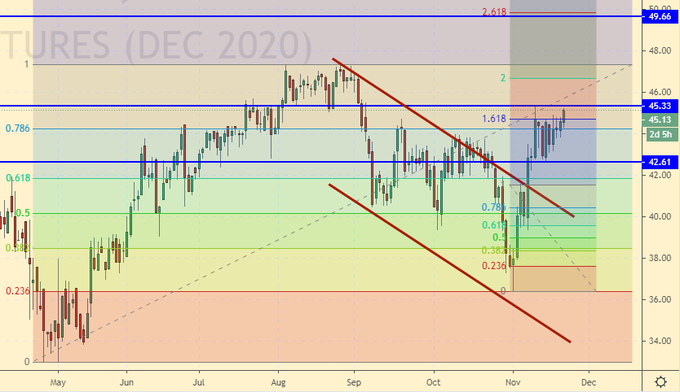 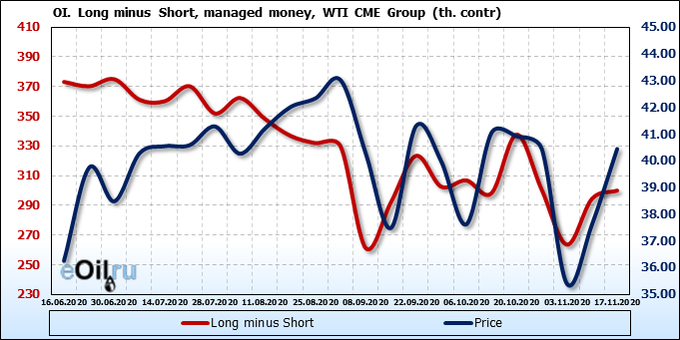 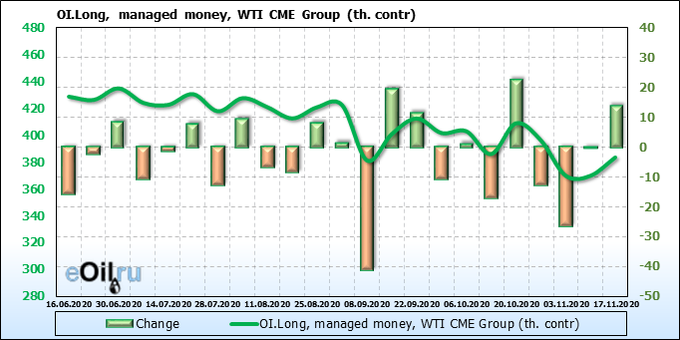 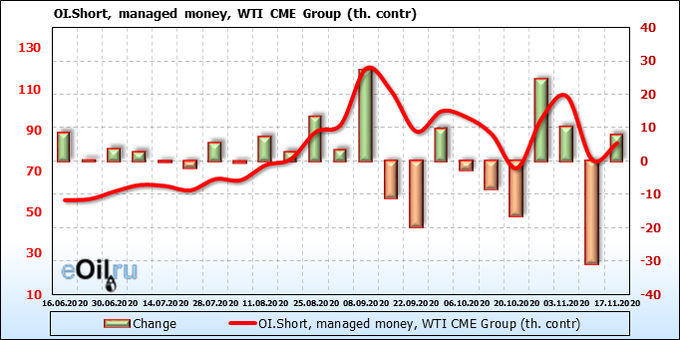 Fundamental US data: the number of active drilling rigs fell by 5 units to 231 units.

Against the backdrop of the emergence of vaccines, people believed in a bright tomorrow. The activity of speculators in the market is growing, which makes the current rise in prices more reliable and confirmed.

Growth scenario: January futures, expiration date December 21. Despite the fact that the OPEC meeting was inert, the participants believe in growth. We will keep longs. In case of a pass above 43.50, you can add.

Falling scenario: if the market reaches 48.00, then we will think about selling. A small short with a tight stop is possible from the current levels. 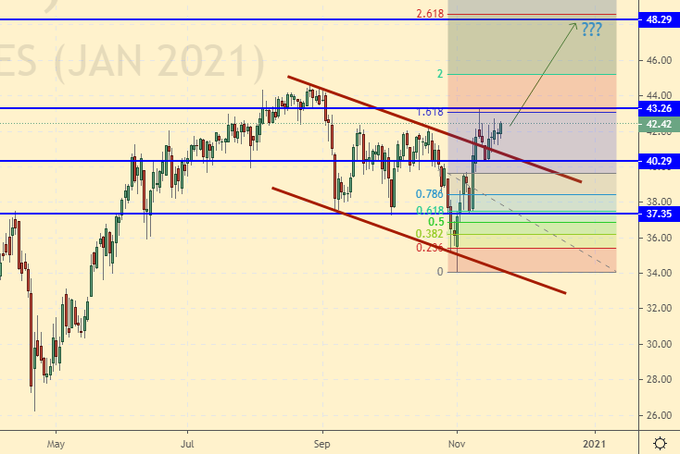 Growth scenario: December futures, expiration date December 10. Oil pulls fuel prices with it. We will keep longs and expect to reach the 410.0 area. In case of growth above 375.0, longs can be increased.

Falling scenario: you can sell from current levels. There aren’t many chances, but the reward / risk ratio is good. Recommendation: 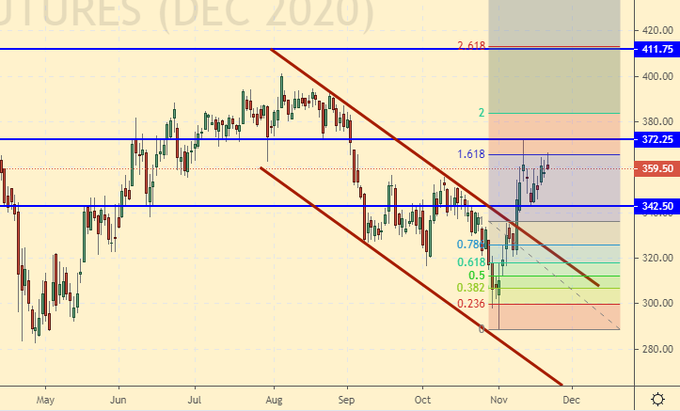 Growth scenario: January futures, expiration date December 29. The gas went deep underground. The fall from 3.500 was rapid. Some recovery is possible from current levels. We will buy, but we will not give the market much freedom.

Falling scenario: selling is not at all interesting. There are very few profit prospects. We do not enter the short. Recommendation: 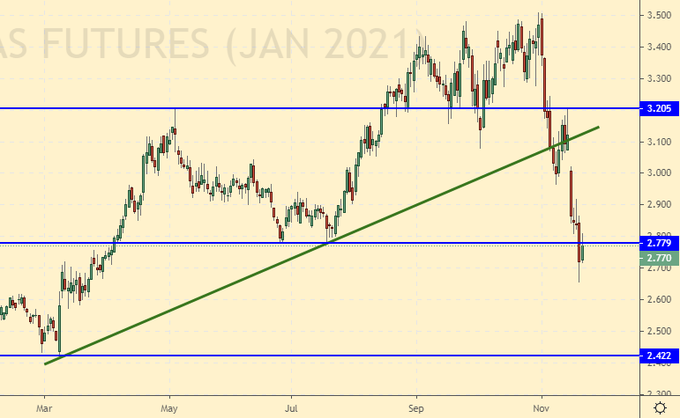 Growth scenario: while we are below 1900 we will not buy. The prospect of a normalization of the situation in the world with the advent of vaccines will put pressure on prices. Growth in the future will be possible when the market focuses on the dollar’s problems.

Falling scenario: we stand in sales. In case the market falls below 1850, you can add to the shorts. 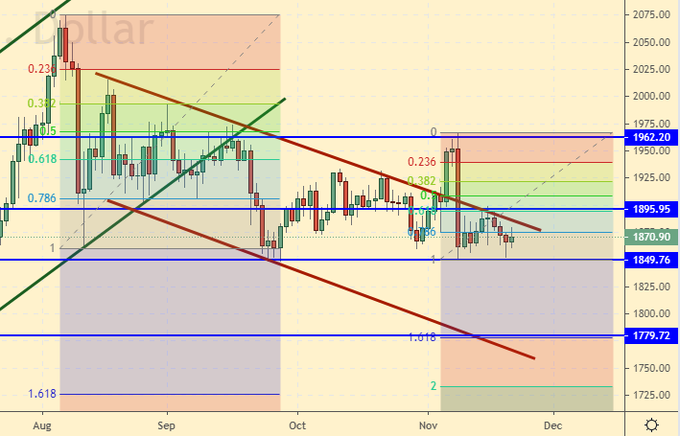 Growth scenario: the market cannot take 1.1900 yet. The problems in the Eurozone due to the virus are still growing, which does not give a chance for a quick strengthening of the euro. Nevertheless, the European bureaucrats in Brussels seem preferable than violent Washington.

Falling scenario: we will refrain from sales for now. Let’s get back to talking about shorts only in case of falling below 1.1700. 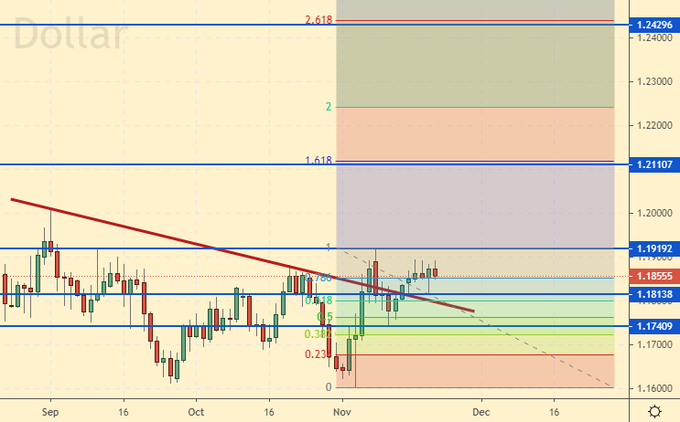 Growth scenario: the dollar has nothing to offer yet. There is no growth in any form. Therefore, we stay away from shopping. The weakness is projected in the US currency in the first months of Biden’s rule.

Falling scenario: ruble fans continue to press, and the deeper they plunge the quotes, the more fearful buyers become. If the market breaks down at 75.80, then stop orders will be triggered, leading to a rapid move at 75.00. The target at 73.00 looks plausible. 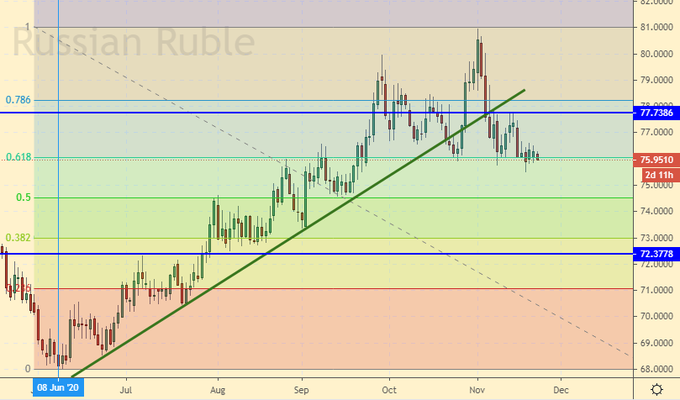 Growth scenario: the market slowed down, but did not pull back. This betrays the desire of the crowd to continue to drag the market to new heights. So far, we do not see any prerequisites for any concern. We will keep the longs opened earlier and expect growth.

Falling scenario: if there is any rollback from the current levels, then it is more convenient to work it out on the clock. Against the backdrop of growing oil and the start of vaccine replication, there are no prerequisites for the market to fall. Biden’s rise to power in the United States is capable of driving investor optimism around the world to new heights. Not for long, though. The current background will be positive for two to three months. Hardly any longer. 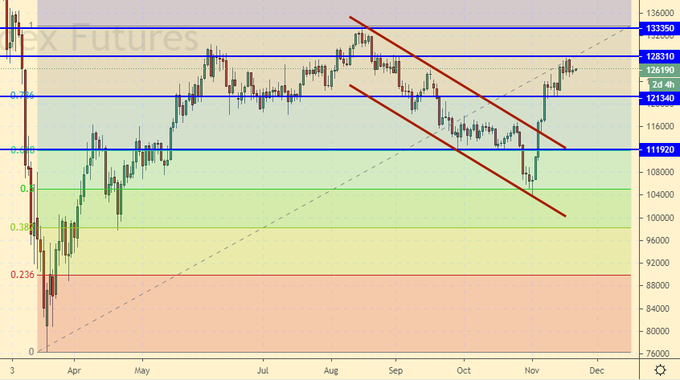