Price forecast weekly from 30 November to 4 of December 2020 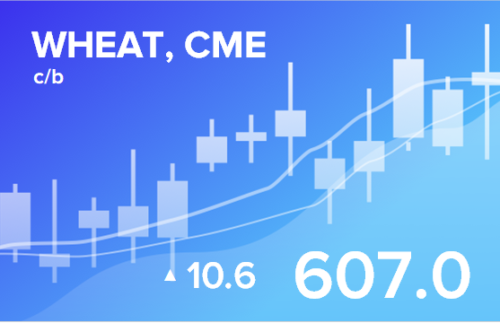 Thanksgiving in the United States has made the past week a little messy. In general, the market remained at the same levels. I would like to note the positive, which brings the expectation of the beginning of the active stage of vaccination, which will allow to reduce the rate of spread of the virus in the spring. So in Russia the program starts in December.

The more moisture accumulates in the fields, the less risk there will be for a failed 21/22 season. Thus, favorable weather in December, relatively warm with a lot of precipitation, is able to keep prices down.

In addition, if quotes remain at current levels, then many farmers in the United States and Europe, who did not believe in wheat before, will prefer to focus on this crop in the spring, as current prices are in line with 2014 levels. The increase in acreage is also able to restrain the rise in prices on the grain market.

By reading our predictions, you could have made money in the gold market by taking a move down from $ 1890 to $ 1780 per troy oz.

On December 1, in the evening, we must learn about the prospects for cooperation between the OPEC + countries. Most likely, the agreement to cut production will be extended for the next three months. If we talk about a period of six months, then everything is not so simple here. It is unlikely that the same Arab Emirates will roll over their own commitments for longer than the first quarter.

Why can this happen?

In the current situation, the exporting countries will count on continued price increases, which, when approaching the 70.00 level, can raise the question of the need for a deal by a number of countries, including the UAE.

The second scenario is less obvious. The influence of the United States in the Middle East should not be underestimated. Democrats are gradually getting their hands on the reins of government. Blackmailing monarchies cannot be ruled out here. The collapse of the cartel is one of the political goals of Washington. If any of the major players in the oil market falters, energy prices will collapse.

We can assume that on Monday and Tuesday there will be an increase in the area of 50.00, and after the announcement of the decision to extend the deal until the 1st quarter of 2021, a correctional course will begin by 45.00.

There is an unambiguous understanding of the fact that the Democrats, having gained de facto power in the United States, issued an unspoken order to the military from above to intensify provocations on the border with Russia, as well as to begin full-scale pressure on Iran in connection with its attempts to obtain full-fledged nuclear weapons.

This is a very unpleasant vector that lays down negative expectations for the next 4 years, and possibly 8 years. Now, on any day or night, a shot could be fired towards a NATO naval or airplane on the border with Russia, leading to severe political stress.

We remember that under the sauce of a worsening external situation, citizens can easily be explained why they now eat pasta without mayonnaise. And this will have to be done by the Biden administration in February, as the labor market in the United States is recovering extremely slowly.

Thus, for the dollar/ruble pair, we see the risk of the dollar strengthening in the event of a military conflict with NATO on the border with Russia.

Growth scenario: December futures, expiration date December 14. During November, buyers failed to force the market to rise. It is logical to assume that now we should expect a phase of falling to 560.0. We will buy either after it rises above 620.0 or falls to 560.0.

Falling scenario: last week’s thin pre-holiday market did nothing good. We went up and down. But we have the prerequisites for the breakdown of the growing price channel downward. We will sell. Recommendation: 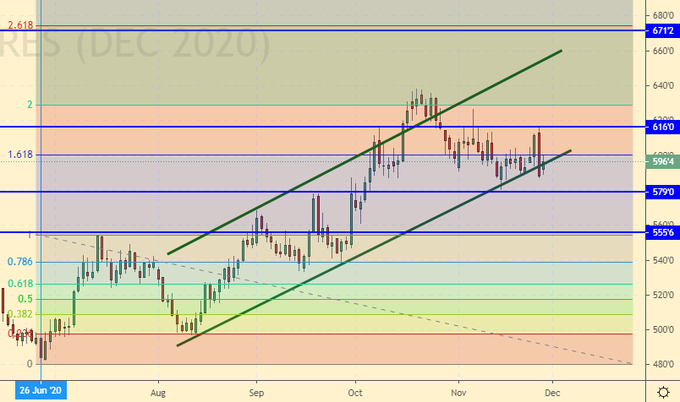 Growth scenario: December futures, expiration date December 14. Bulls cannot get past the highly viscous 425.0 region. We see three highs in a row, which are lined up on the same line. This is a bad sign for buyers. Now, in order to survive, they need to break through up to 430.0, if this fails, we will fall to 376.0.

Falling scenario: the current picture is a clear short. It is possible that we will shadow at 431.0, but we are unlikely to be able to go higher. 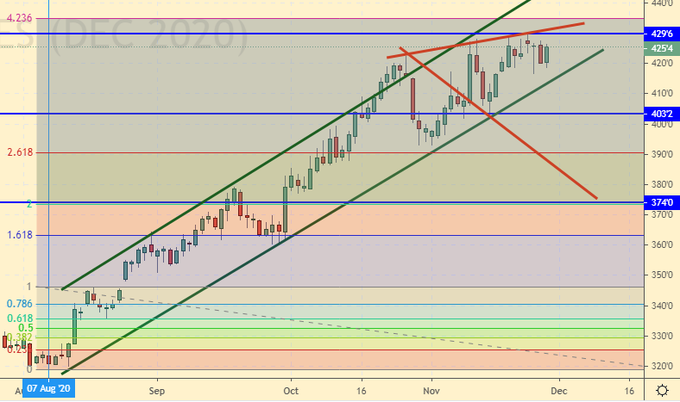 Growth scenario: January futures, expiration date January 14. We flew 1170 and don’t want to go back. It’s strange and very powerful at the same time. The prerequisites for a rally are emerging. We have to react: we buy from the current levels with a short stop.

Falling scenario: we will try to enter short again. The market for agricultural products, and soybeans in particular, performed well in the fall. A rollback is coming. 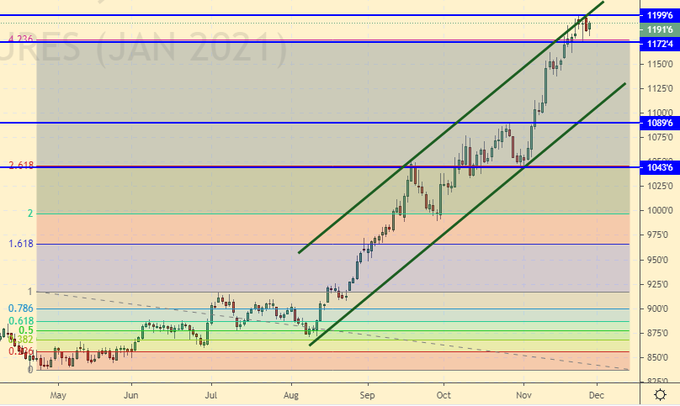 Growth scenario: March futures, the expiration date is February 26. We see a rollback. And we would like the market to reach 16.00. As long as we are above 14.50, things will not look so bad. Otherwise, you will have to revise your trading plan.

Falling scenario: the idea is the same, we will sell when we approach the 16.00 area. The current fall looks extremely unpleasant. But we did not enter it earlier, now it is too late to do it. We do not sell. 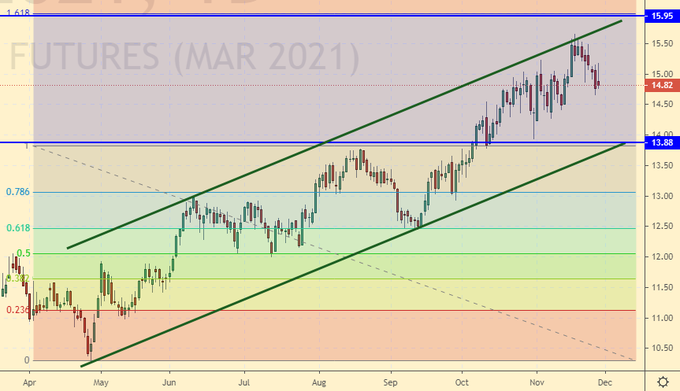 Growth scenario: considering the December futures, the expiration date is December 18. We see an aggressive post-holiday opening in the United States. In principle, this is not bad, since we are in longs from 110.0. We hold positions, we do not open new ones.

Falling scenario: short from current levels with the intention to close the gap at 115.0. It’s not a bad idea, but it’s better to work it out on a watch. Who went short on the approach to 120.0, hold positions. Recommendation: 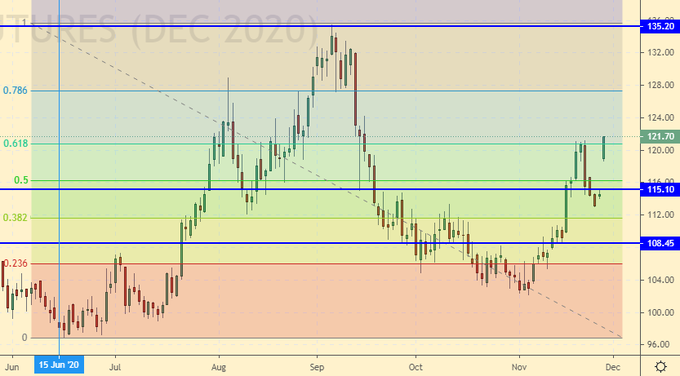 It can be stated that the bulls have done their job. The market looks warmer. The masses of the people are buying up oil contracts with hope for a bright future. We are expecting a rollback next week, as the renewal of the OPEC + deal is already in the price.

Growth scenario: December futures, expiration date December 31. We see good growth. Considering that they opened at 42.00, when approaching 50.00, you can take profit. Thrill-seekers can wait for a touch of 50.40. Movement to 60.00 is still unlikely.

Falling scenario: sell on Tuesday night while trying to go above 50.00. The market is unlikely to go without stopping at 60.00. Here it would be nice to have an OPEC + decision on hand to understand the situation. If production conditions are tightened, then a unidirectional rise to 60.00 will be possible. 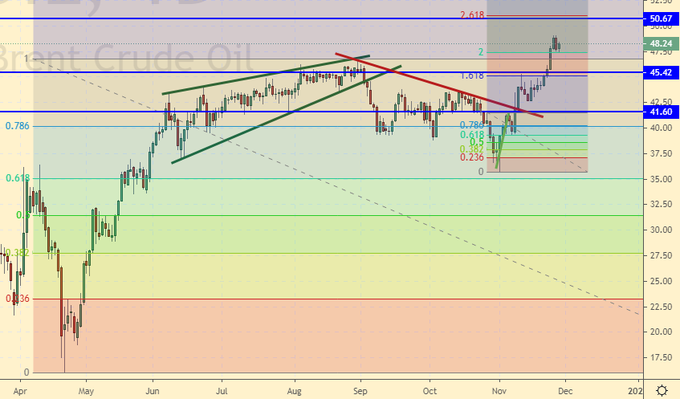 Fundamental US data: the number of active drilling rigs increased by 10 units to 241 units.

Growth scenario: January futures, expiration date December 21. We see the development of an upward impulse. We still have the target at 48.30. Note that failure to reach this level and the beginning of a rollback from 46.00 may lead to a strong fall in prices.

Falling scenario: we will sell from 48.00. Most likely the market on Monday and Tuesday will continue to grow against the backdrop of the OPEC + meeting, then a rollback will follow. 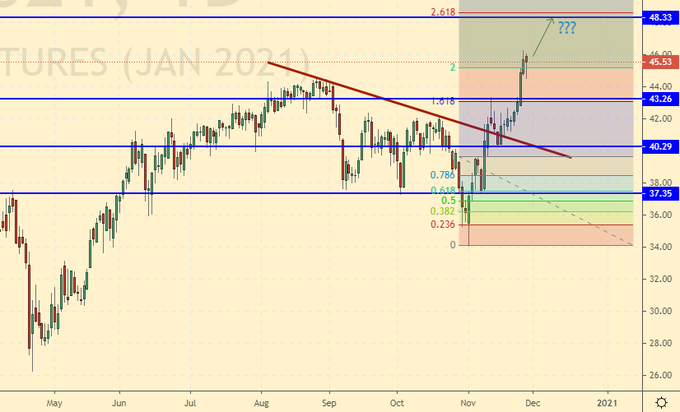 Growth scenario: December futures, expiration date December 10. Target at 410.0 in sight. We keep longs. Growth is perceived as aggressive. A correction can begin at any moment in the market. This is unnerving.

Fall scenario: waiting for the approach to 410.0 and selling. Looking at oil. It completely determines the current development of events. 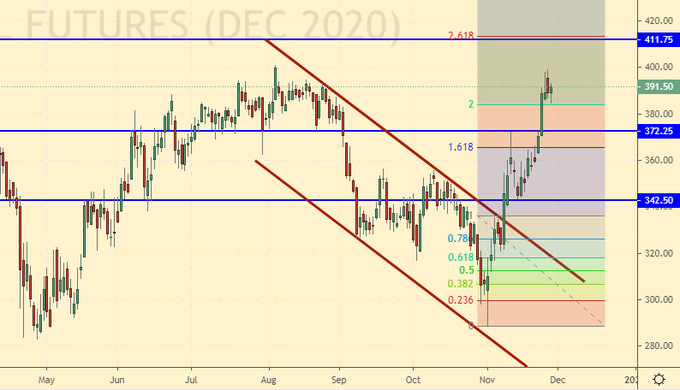 Growth scenario: January futures, expiration date December 29. We see a rebound. It makes sense to use Friday’s correction for purchases, after which one will have to hope for a cold winter in Europe and the USA. Falling scenario: we will not short from the current levels. Extremely low potential for profit taking. 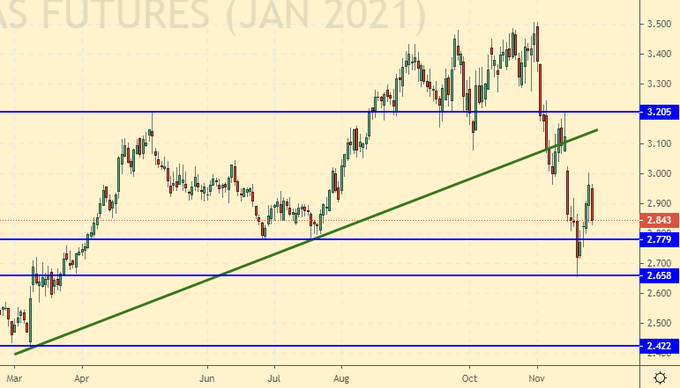 Growth scenario: is that all? That is the question. Structurally, the correction is over. We have to turn around and go to 2260. There is a risk of dropping to 1700, but we will have to start collecting longs from the current levels.

Falling scenario: everyone with a profit at 1780. We do not open new shorts. 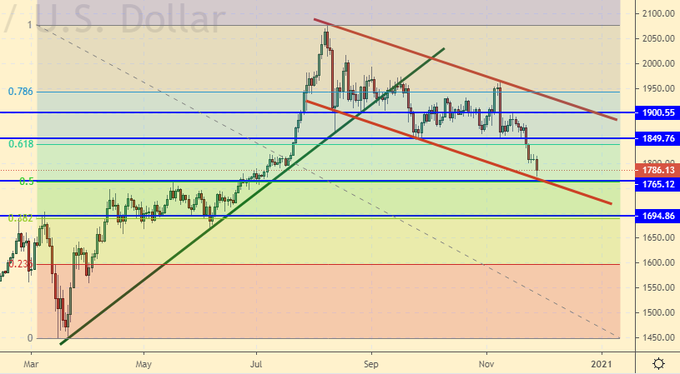 Growth scenario: Democrats’ rise to power in the United States has reduced the number of dollar supporters. The pair is heading towards 1.2400. It is possible that the dollar will lose weight throughout 2021.

Falling scenario: no short is needed here. The market showed a new high. We are frankly going up. Recommendation: 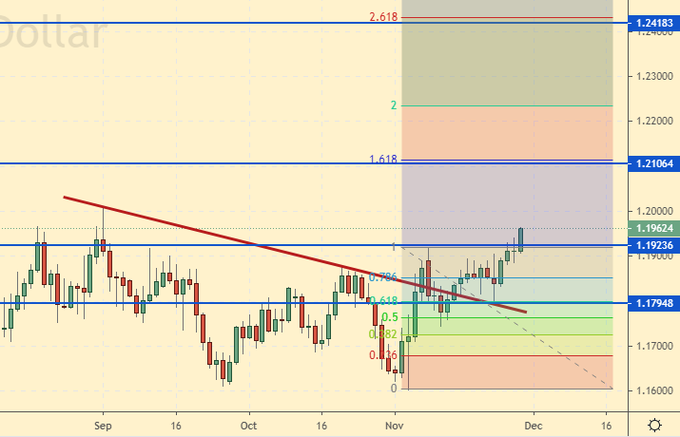 Growth scenario: we observe an extremely unpleasant upward movement for the ruble. If the market breaks above 78.00, then there will be preconditions for setting a new all-time high at 89.00. It sounds scary, but if the provocations of the Americans on the Russian border continue, and sooner or later an answer is given to them that will lead to losses among the American military, then the ruble will have very gloomy prospects.

Falling scenario: unfortunately, the current, albeit small growth, led to the loss of initiative on the part of sellers. Even growing oil does not help. You will have to tighten your stop orders strongly, so that the growth of the pair does not lead to significant losses. 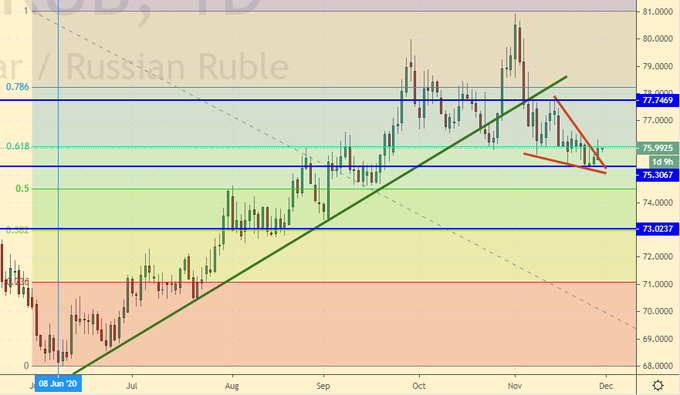 Growth scenario: we continue to climb, but the rate of price growth decreases. Maintaining optimism is possible only if a favorable external background persists, and, apparently, it begins to deteriorate. The successful placement of the OZON retailer is positive, but too fast anti-Russian impulses of the Democrats, starting with provocations on the border, can lead to aggravation of relations with Washington, which will cause an outflow of investors. We are holding longs for now, but we will not give the market much freedom.

Falling scenario: if we get stuck in the 130000 area, it could be a reason for a sell-off, especially against the backdrop of a possible drop in oil prices. Here you can go short with little risk. 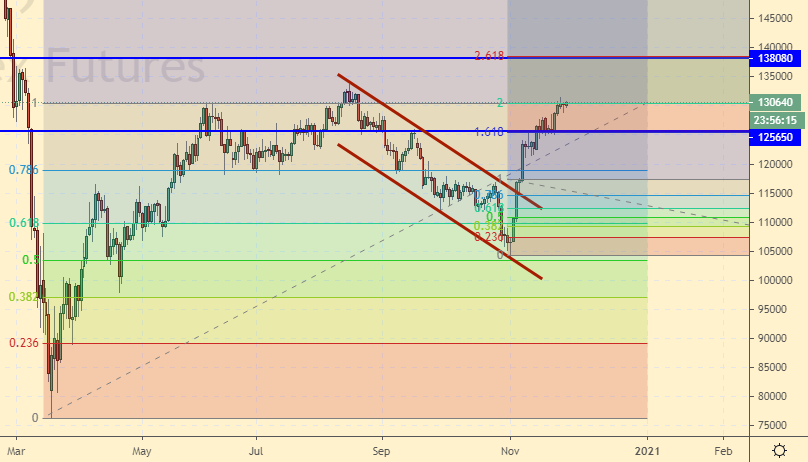