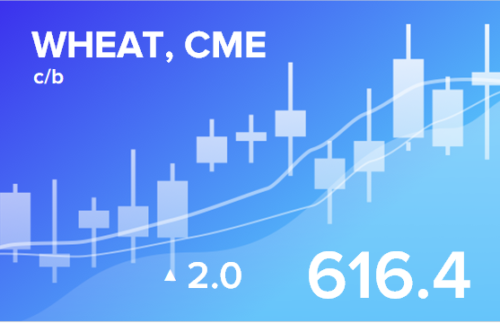 In China, 750 thousand people last week were tested for coronavirus in a single city due to another outbreak of the disease. The facts of the emergence of new foci only increase the level of stress in society, but there is nothing to oppose this except discipline and vaccination. France will meet the New Year in quarantine. In the United States, 90 people die per hour from COVID-19. These data drives traders into depression.

Against such a bleak backdrop, governments will tighten food security measures to support the grain market. Thus, high import demand in China and Pakistan contributed to the increase in world trade to a record level in November. Unprecedented demand from large importers led to a decrease in stocks in exporting countries and a strengthening of world prices. The food market will be in the spotlight next year.

There are prerequisites for the fact that optimism in the oil market has dried up. California is under strict quarantine, and if so, the US oil reserves will grow. Growth by 15 million barrels last week was only the first shot. If the situation with the virus does not change for the better, and there are no prerequisites for this, then the market will fall.

It is clear that governments will take all possible measures to stabilize the situation, but until the mass vaccination is carried out, we cannot talk about any improvement, and even more so about economic growth in 2021. We are told from all information sources that next year will be a year of growth, but judging by what is happening, there is very little hope for this.

The national currency reached the level of 73.00, however, we will question further strengthening, since Russia cannot count on improving the economic situation in the country without the growth of the world economy.

Reducing demand and falling raw materials prices will be the main obstacle to budgeting for next year. We’ll have to borrow again, and in what volumes it is not yet clear. Maybe four trillion will be enough, the government plans to borrow this amount in the 21st year, and it may be necessary to borrow all ten trillion. For reference: this year the volume of borrowings will amount to 5.4 trillion. rubles.

Note that in the short term, the ruble may be helped by a worsening situation in the US.

We remind you that on Monday the 14th the electors vote in the USA. And on the 16th we are waiting for the Fed meeting. The comments about economy is a hot topic. The inauguration of the US President is scheduled for January 21st. 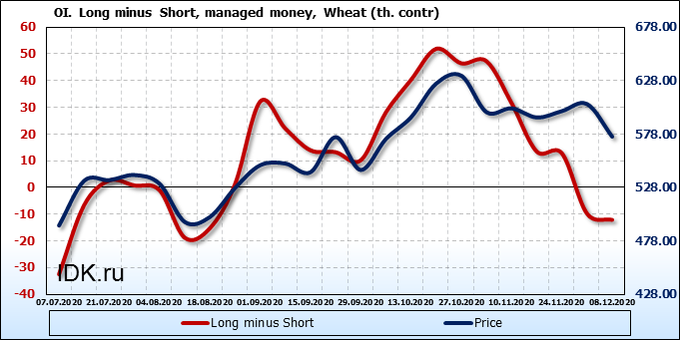 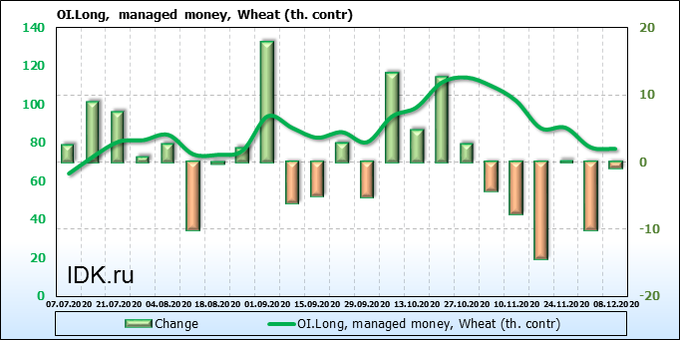 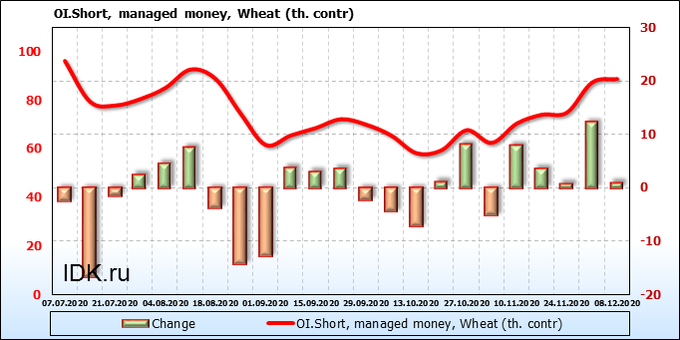 The difference between the positions of buyers and sellers has stopped increasing, which can lead to an upward reversal. After the release of the USDA report, market participants preferred to buy, as there was no significant increase in the yield forecast for the current season.

Growth scenario: March futures, expiration date March 12. We are above 600.0 again. This is a good preliminary signal under the circumstances. Wait for a rise above 625.0 or a pullback to 600.0 and buy. Note that we have before us the «three white soldiers» candlestick pattern.

Falling scenario: Friday was too bold. The bulls drove the market well above 600.0, which should have wiped out all sellers. Now we will think about selling after the market falls below 595.0. A stop can be placed above 615.0. 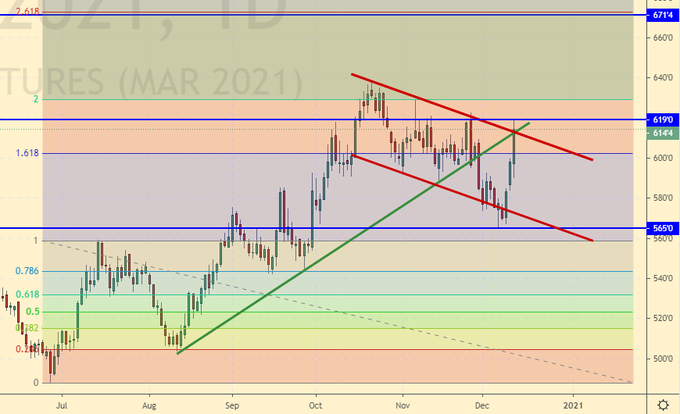 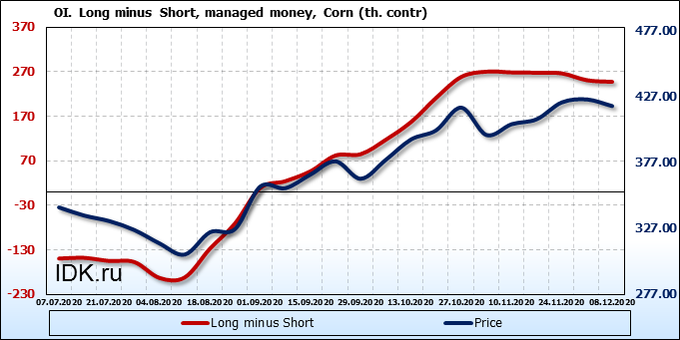 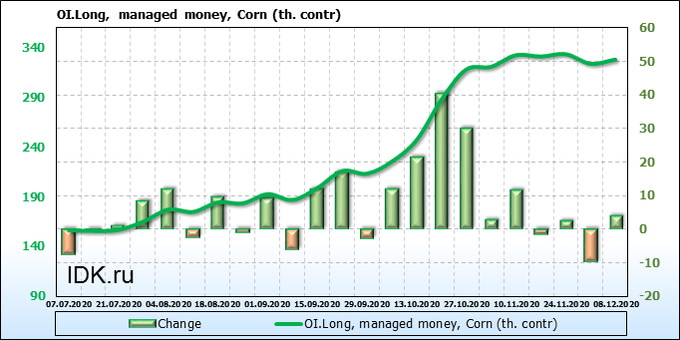 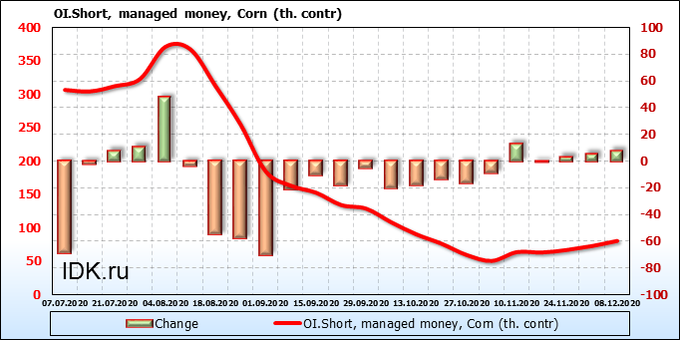 We see a slight increase in open interest over the week for both bulls and bears. The market has been in equilibrium in terms of supply and demand from speculators since October, but this cannot last long. We can expect an active phase of mood swings in the near future.

Growth scenario: considering the March futures, expiration date March 12. Prices have broken through the growing channel and have consolidated below it. This creates the preconditions for the continued fall of the market. We refrain from shopping.

Falling scenario: just like two weeks earlier, we continue to count. that the current picture is an unambiguous short. Here you can either sell or increase the position down. 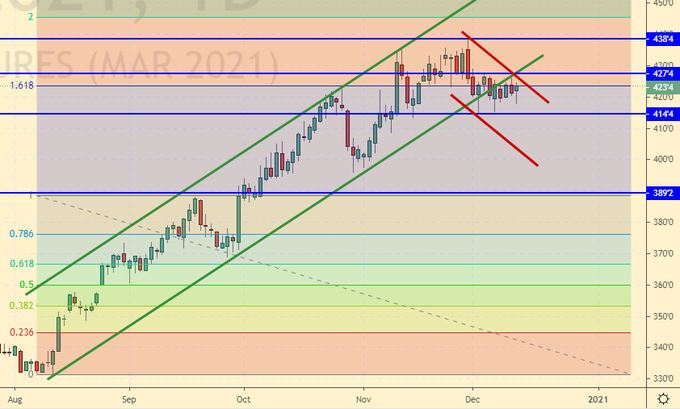 Growth scenario: January futures, expiration date January 14. For global shopping, we are high. I would like to see a drop to 1000.0 in order to recommend new longs. It is better to work out an upward reversal from current levels on hours.

Falling scenario: we will rely on the market to roll back even lower, to 1050, and possibly to 1000.0. The one who entered the short — hold positions, we no longer make new sales. 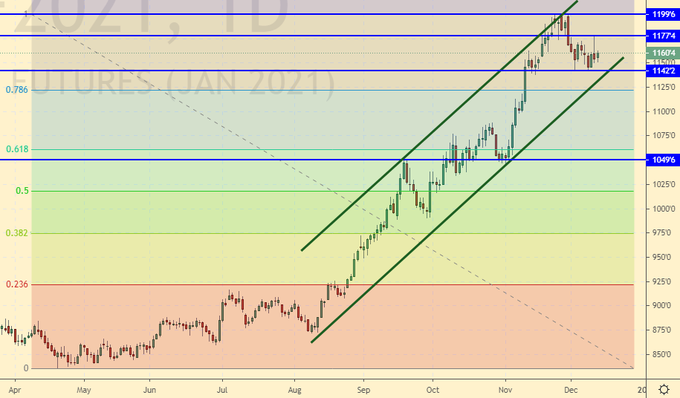 Growth scenario: March futures, the expiration date February 26. We are waiting for the prices to approach 13.90. There will be a struggle, which, possibly, will end with a downward channel breakdown. We are not buying yet.

Falling scenario: we still have nothing to do but wait for the market to approach by 16.00. We will sell only there. While we are out of the market. Shorts from the current levels are allowed on «1H» intervals.

Purchase: think when approaching 12.50, not higher. 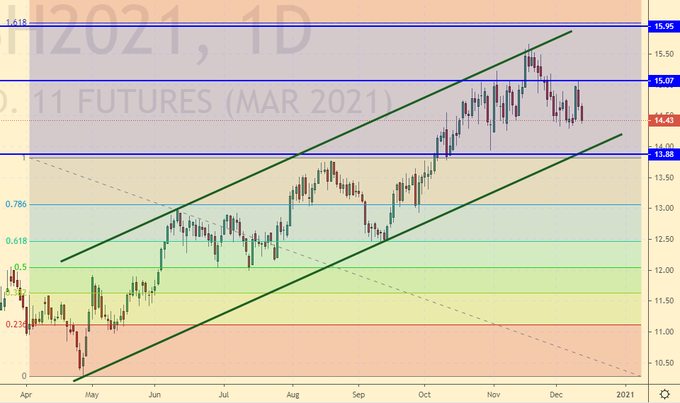 Growth scenario: March futures, expiration date March 19. Another branch up suggests itself, so we will keep longs. If it is not there, then sellers will have a chance to bring down the market. Those interested can add here.

Falling scenario: consider shorts if the market falls below 112.0. But selling on a breakout is not very good, there you will need to look for options. 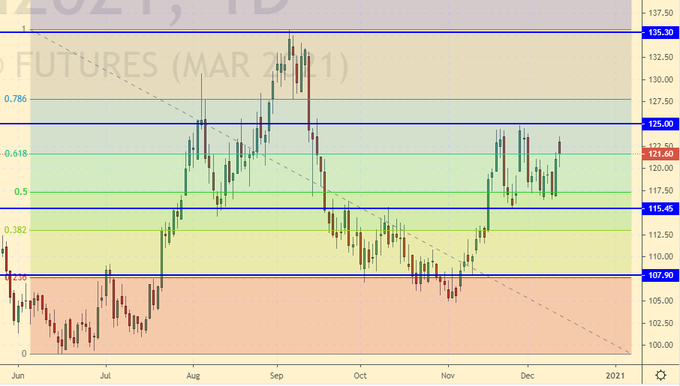 We see an increase in the activity of bulls, while sellers are in no hurry to leave their positions further, which tells us that there is a possibility of a change, or at least a slowdown, of the current trend.

Falling scenario: we continue to believe that we should sell here up to the level of 52.00. We can count on a correction by 45.00, especially since the Chinese virus has gone on the offensive throughout the northern hemisphere, which threatens with a strong increase in oil reserves. 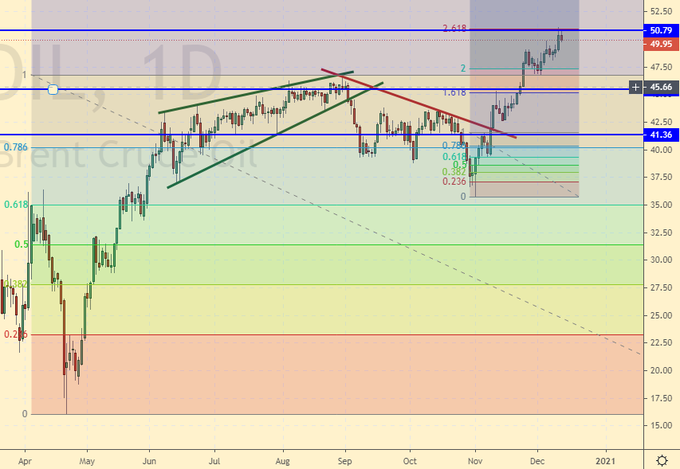 Fundamental US data: the number of active drilling rigs increased by 12 to 258. 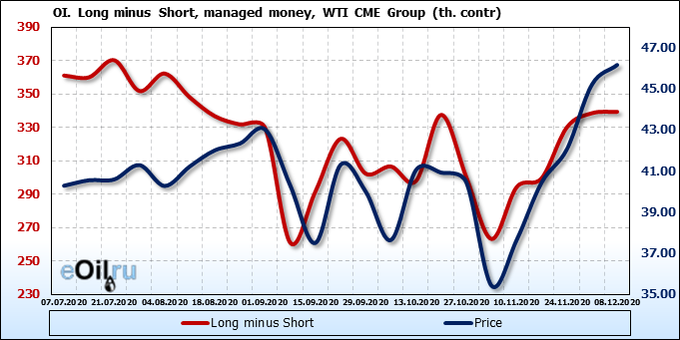 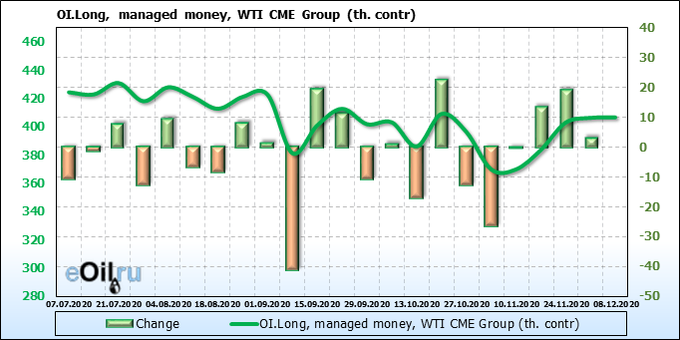 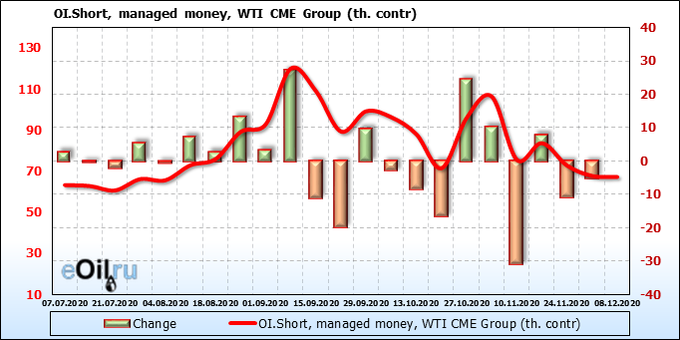 The speculators show no activity. On Monday, a significant event in the United States is the electoral vote. Most likely, after it becomes clear who will become the next US president, free money will return to the market.

Growth scenario: January futures, the expiration date December 21. We see an attempt to pass to 49.00. There is still room for growth, but it is minimal. The current levels are too high for purchases. We are out of the market.

Falling scenario: wait for touch 48.30 and sell. Growth above 50.00 in the current environment seems unlikely, as we are unlikely to see a drop in US oil inventories in the near future. Recommendation: 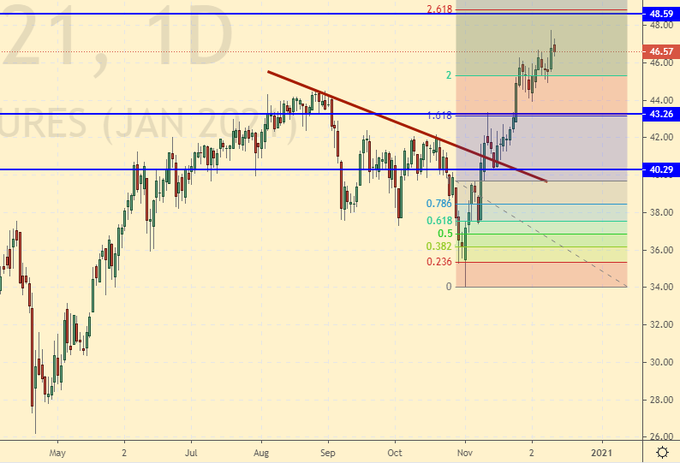 Growth scenario: consider the January futures, expiration date January 12. The market tried to climb above the theoretical level of 412.0, but so far it has failed. In any case, the goals have been achieved, and we see no point in sitting in the position further, counting on a miracle, in the form of a move to 500.0. Another thing is to buy after a rollback to 370.0.

Falling scenario: sell here. A rollback to 370.0 is highly likely.

Purchase: no. Close everything, everyone with a profit. 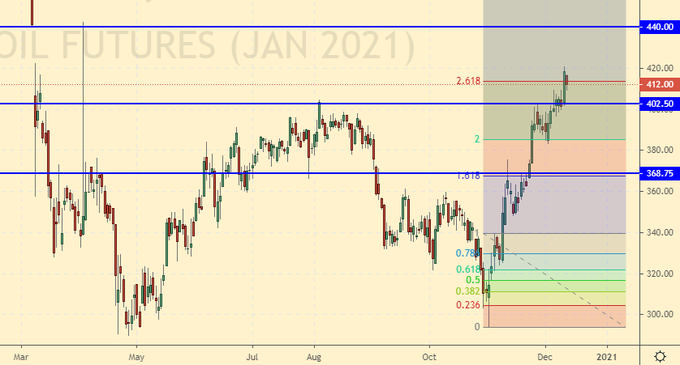 Growth scenario: January futures, expiration date December 29. The market bounced up amid falling temperatures in Europe. There is no great potential for growth yet, as the LNG market is oversaturated, any demand will be satisfied. However, in case of growth above 2.800, let’s think about buying.

Falling scenario: we do not sell, as there is no speculative sense in these sales. 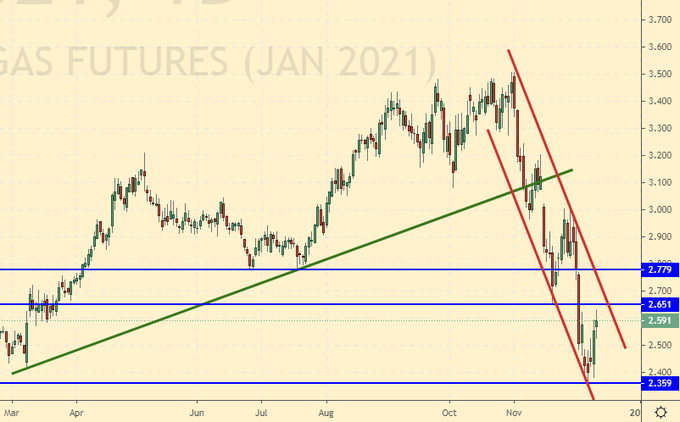 Growth scenario: while gold is below 1900, sellers will have the advantage. There is a chance of growth here, but we would like to see a drop towards 1820 in order to buy as low as possible. However, if the electors vote for Biden, then gold will begin to grow on Tuesday.

Falling scenario: you can continue to work out the idea of falling at 1666. The market is in a falling channel, moreover, we were unable to rise above 1880. 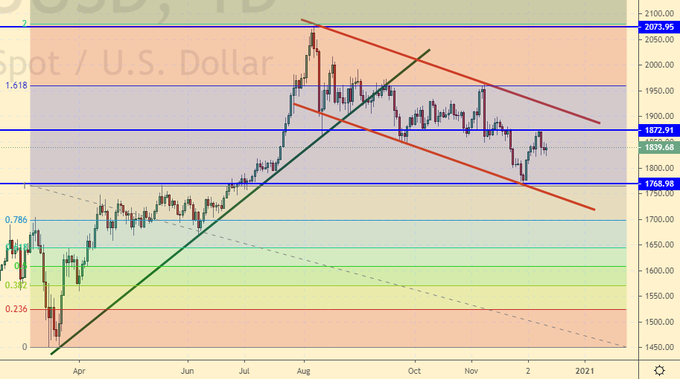 Growth scenario: we have two central events next week, on Monday — the electoral vote, on Wednesday — the Fed meeting. They will be surely appreciated by speculators. A corrective move to 1.1930 may await us, but below the pair is not visible.

Falling scenario: it is somewhat premature to enter short from here on «daily» time intervals. We consider selling as interesting either after the growth to 1.2400, or after the fall below 1.1800. We read the news, all the attention to the events in the USA. 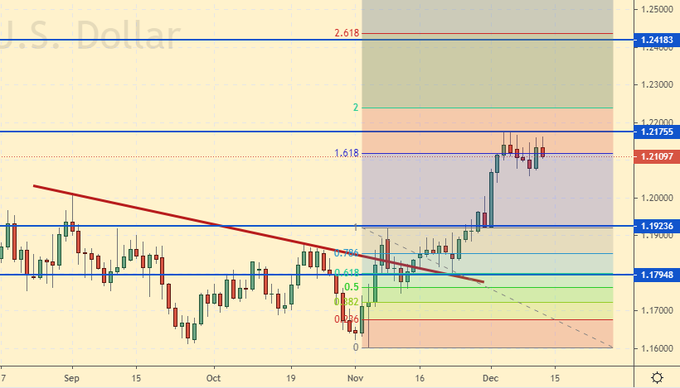 Growth scenario: there is nothing to discuss here. Here it is necessary to buy, realizing that we can fly by inertia to 71.50. Biden’s victory in the electoral vote should lead to a sharp drop in the ruble to the area of 75.00, but further developments are still in question. For the new American administration, Russia will be somewhere in the 10th or 20th place in terms of importance. We do not expect strong pressure on the Kremlin until March or April next year.

Falling scenario: there is no point in selling here. We will consider opportunities for new shorts only after the market rallies to 75.00. 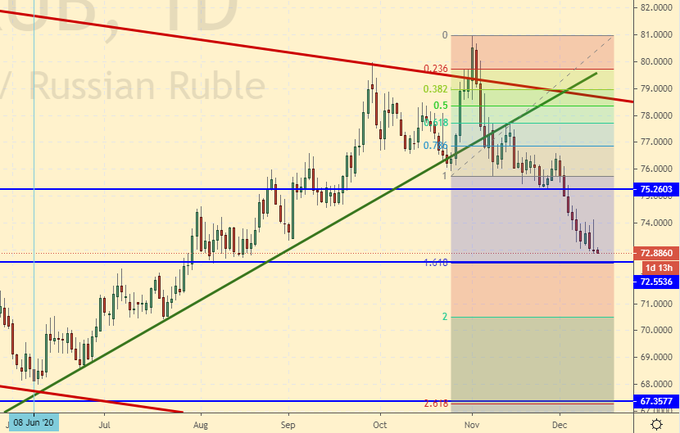 Growth scenario: the market continues to grow without recoil. It is possible that we will touch 144000 after which a full-fledged rollback will begin. It is also impossible to deny the possibility of growth to 160,000. However, as soon as the electors vote for Biden, the Russian market is highly likely to react to this event by dropping by two or three thousand points. It is not excluded that the fall will begin on Monday before the vote, as the US Supreme Court did not consider the application from the state of Texas on election irregularities, which means Biden’s victory in the voting. Despite the temptation, we do not recommend opening new buy positions as a result of a possible rollback.

Falling scenario: in order to enter the sale, we need a long red candlestick. While the market sees no reason for a fall, it is better to stay aside, since the index is quite capable of growing up to 160,000 before the New Year.

Purchase: no. All with a profit! 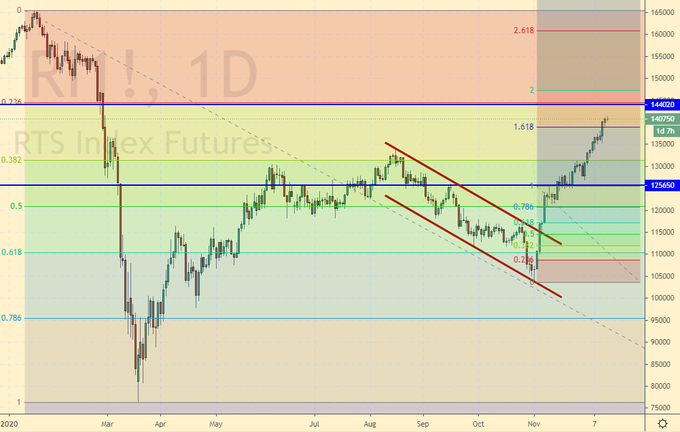