Importers are not ready to pay more than three hundred dollars per ton of wheat. This is clear because of the positions of Turkey and Egypt. Attempts to tender bids above $ 300 are simply rejected by buyers.

Considering that the vaccination process has started, the situation is normalizing in most countries by the summer. This means that we will meet the autumn harvest in a normal environment, which will reduce the panic to nothing, and with it the threat of a logistical collapse.

We expect a drop in the rush demand for grain, although in the long term, the global trend to create deeper food reserves will continue in many countries.

Oil cannot break through due to the problems in the European economy associated with the coronavirus. Fuel demand remains low.

The bulls can, of course, rely on the fact that Biden is a fan of green technologies, and the procedure for obtaining oil production licenses in a couple of months will be complicated, however, in Saudi Arabia there are no problems with obtaining oil production licenses. The states of the Arabian Peninsula will gladly reimburse potential 3-4 million barrels per day, which Washington will voluntarily give up. Everything will be the same as it was under Obama: the proceeds from oil will be directed by the Arabs to buy weapons in the United States.

Realizing that there will be no global deficit, traders are in no hurry to accelerate the market to 60.00.

The US Federal Reserve meeting passed without any excesses. Powell confirmed the preservation of the program to buy out government bonds for $ 120 billion per month. Main goal: improving the situation on the labor market. Inflation is monitored, it is not accelerating and is below 2%. Thus, there is no reason to raise rates.

The preliminary US GDP falls by 3.5%. It is not clear how they thought, only New York and Los Angeles, who were «killed» by quarantine, lost about 2 million jobs. Initial applications for unemployment benefits are at around 900 thousand.

If oil goes down, then the ruble will have nothing to rely on, since oil and gas budget revenues sank 34% last year compared to 2019, to 5.235 trillion rubles, and the index of Russian debt securities, RGBI, continues to be in a downward trend. 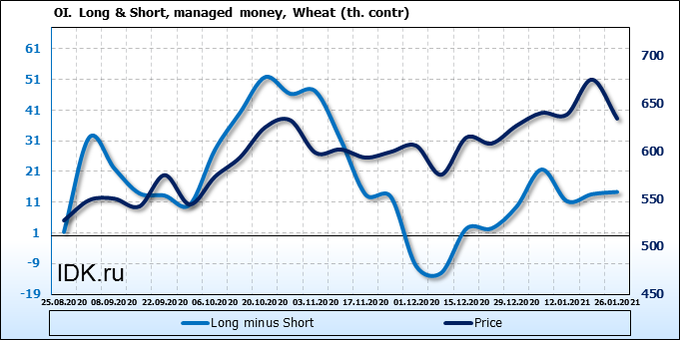 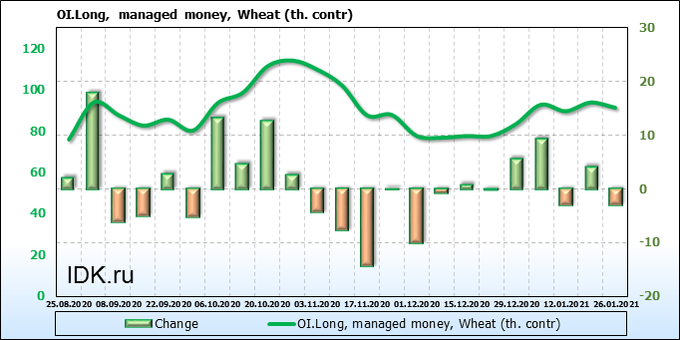 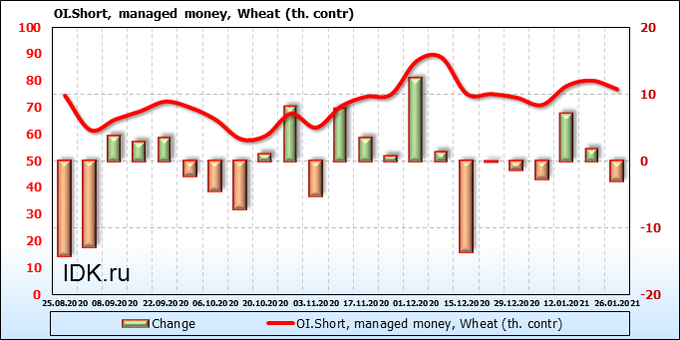 In the absence of ideas, speculators’ money leaves the market. This makes the situation more subtle. There is a feeling that both sides are disappointed, as some of them fail to reach their target at the top at 710.0, while others cannot force the market to fall amid the start of vaccination programs.

Growth scenario: March futures, expiration date March 12. If the market manages to return above 680.0, it will have to buy. In the current situation, we the give preference to sellers.

Falling scenario: we continue to recommend selling. Even if you are closed by a stop order, enter again. The situation is not bad, given the testing from below the previously broken support level. 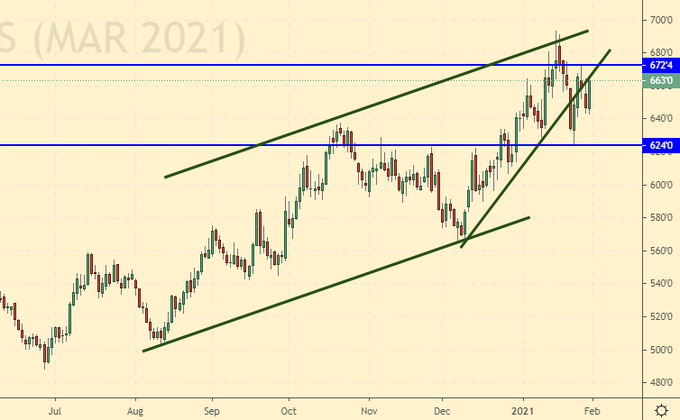 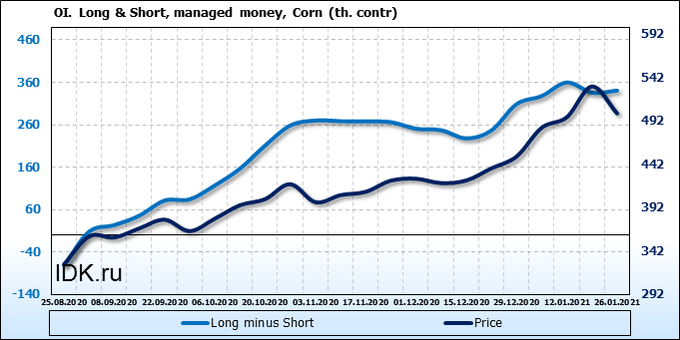 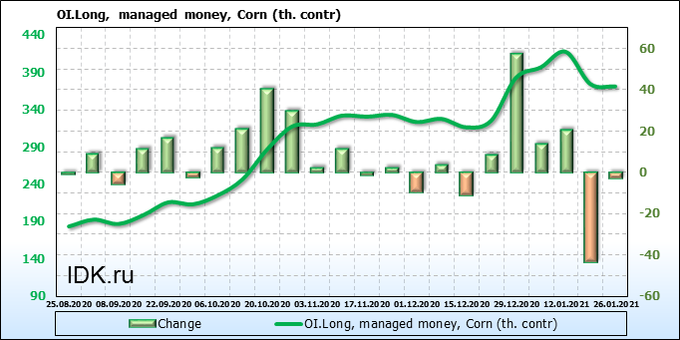 Note that speculators’ money leaves the market. Meanwhile, prices are approaching their main Fibonacci target, the 670.0 area. Buyers there will take profits. But sellers should increase their activity. So far we do not see this, but next week there is a possibility that a rollback will begin after visiting the indicated level.

Growth scenario: March futures, expiration date March 12. We will not buy anything at the offered prices. We are waiting for a rollback.

Falling scenario: set a new maximum. Considering our layout with Fibonacci levels, we do not believe in growth above 570.0. We will sell from 560.0 to 580.0. Recommendation: Growth scenario: March futures, expiration date March 12. The rollback is hardly complete. We need one more branch down to 1250.0. We will count on this. We do not buy.

Falling scenario: we recommend selling. The market has been actively growing for several months. The probability of a corrective move to 1250.0 is high. Recommendation: 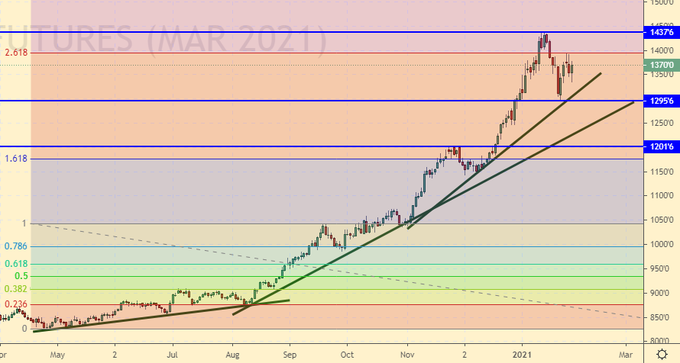 Growth scenario: March futures, expiration date February 26. The market is overheated. A rollback is needed, at least to the lower border of the growing channel. We do not buy.

Falling scenario: keep the previous recommendation — if there is a rollback to 16.30 — sell. By 15.00 we are quite capable of getting off without any problems. Recommendation: 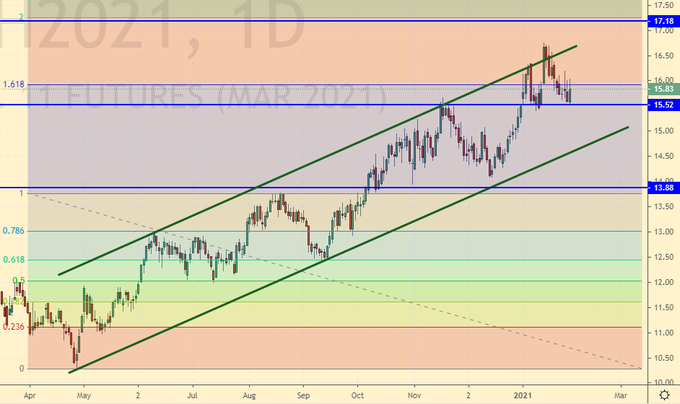 Growth scenario: March futures, expiration date March 19. The market is able to return to 115.0. The situation is ripe for a breakdown of support. We do not buy. If there is a rise above 128.00, think about buying.

Falling scenario: we continue to consider the short in the current situation as appropriate. Those who are already in position — stop. We are quite capable of taking our 10 cents per pound of coffee. Recommendation: 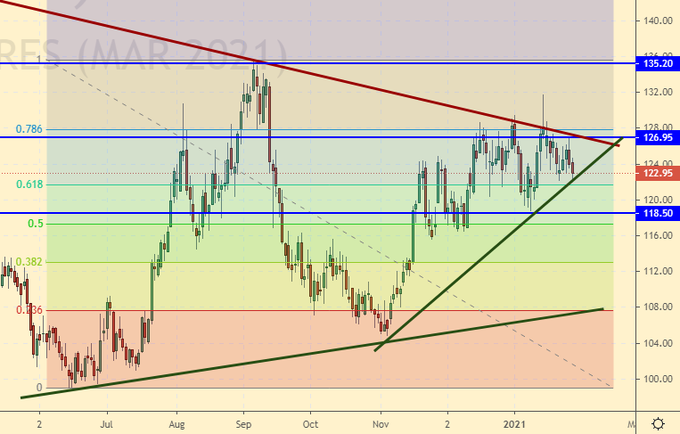 The bulls don’t want to leave. They are gradually being squeezed out, but so far they have money left, which they pour into the market in order to maintain their positions. Considering that prices did go down, we can expect to close long positions by stops next week, which will lead to a sharp move to the 50.00 area.

Growth scenario: February futures, expiration date February 26. For the buyer, nothing has changed in the market. We need a rollback to enter the long. We do not buy.

Falling scenario: keep holding the shorts. Those who have not logged in earlier can do so now. Recommendation: 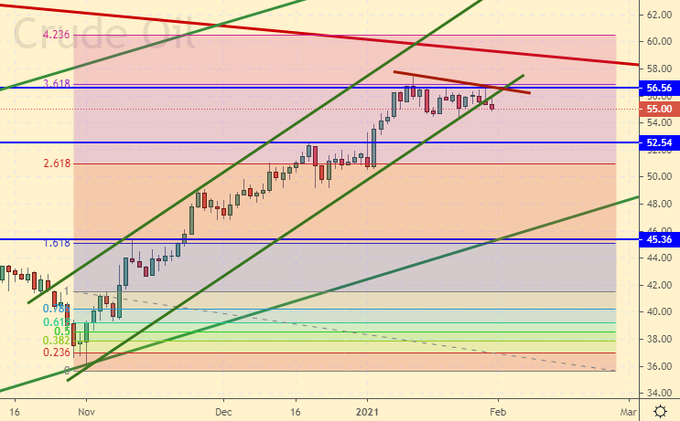 Fundamental US data: the number of active drilling rigs increased by 6 units to 295 units. 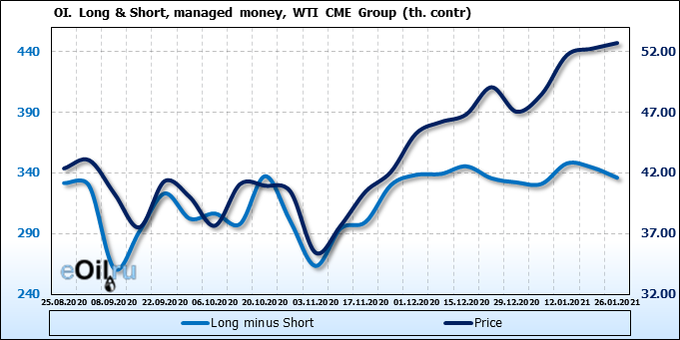 WTI has caught the eyes of sellers. We see an increase in the number of short positions, which can lead to a fall. Note that nobody pays attention to Biden’s words about the prohibition of issuing licenses for two months using hydraulic fracturing.

Growth scenario: March futures, expiration date February 22. We continue to pretend to break the long-term support line. We need a rollback. Preferably by 46.00. We are not buying yet.

Falling scenario: sell here. So far, the market has not managed to gain a foothold below 52.00, which is unnerving, but there are prerequisites for this. Those who are already in shorts, hold positions. 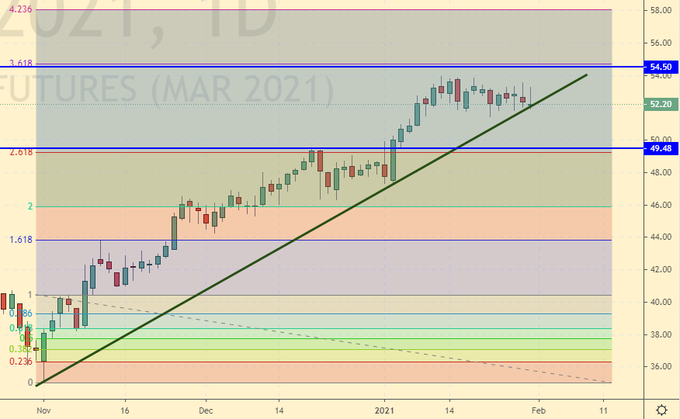 Growth scenario: February futures, expiration date February 11th. We have broken through the support line, but we are in no hurry to fall. We are not waiting for a rollback. The surprise will be the growth without retracement above 470.0.

Falling scenario: we still believe that if the market falls below 440.0, we can sell. I would like to see a long red candle down. Growth scenario: March futures, expiration date February 24. It should be admitted that gas is not very satisfying. There is no power in the market. Friday’s red candle can drive the bulls away.

Falling scenario: the market may go down to 2.300, but such things are better to work out on 1H intervals. We do not sell. 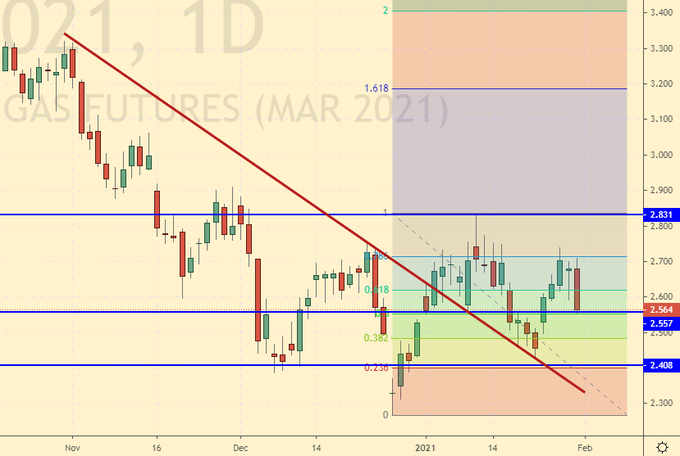 Growth scenario: the FED meeting passed, but nothing happened. But on the silver market, users of the American network Reddit took to hooliganism on a large scale, hoping to swing «gold for the poor» to … yes, in fact, to heaven. This act by small investors may affect the gold market as well. We will buy, however, like a week earlier.

Falling scenario: whoever sold three weeks ago is holding shorts. Considering the story from Reddit, let’s tighten our stop orders. People against hedge funds — this will be a confrontation! We have a bearish picture, but it can be broken. Growth scenario: someone unknown defends the level 1.2100 and so far successfully. Even if we go to 1.2700, which is not a fact, the euro will fall. The eurozone did not grow last year and is unlikely to show anything more than 2 percent this year. America will recover faster, it’s worth realizing. Growth scenario: painted a full-fledged upward impulse. Now, provided that we are not facing a correction to the previous strengthening of the ruble, we will see a rollback to the area of 75.00 and continued growth to 81.40. We keep longs.

Falling scenario: if Friday’s candlestick was not only red, but also long, then we could talk about a test sale for a small volume. But so far sellers have not shown a desire to take control of the market. We can only recommend thinking about selling if the market goes below 74.30. Perhaps by May, those who wish will buy a share of Sberbank at 30 rubles 13 kopecks, instead of the current 260 rubles per share. Falling scenario: if not everything happened, then a lot. Prices are on the way to 130,000, any upward pullbacks are used to build up shorts. Do not discount the possibility of falling to 100,000.