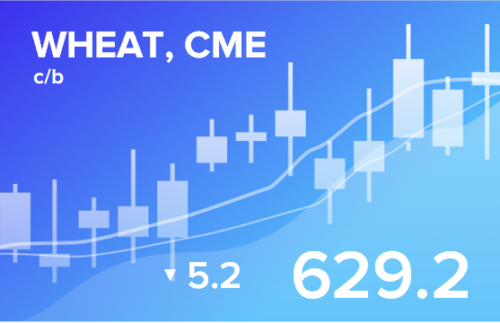 The wheat market stopped its growth immediately after Egypt refused to buy expensive Russian wheat, having failed to see an acceptable offer at the tender. Physical delivery traders will have to moderate their appetites in the next couple of weeks, as after the growth stage it is time to rethink price levels.

There is a problem with winter crops in the Stavropol. If February is cold and snowless, then up to 80% of winter crops may not germinate. The rainfall that fell in January did not bring relief, according to farmers. The snow melts in the fields due to the periodic above-zero temperatures, the water goes into the ground, and there is no snow that should protect the plants from possible frost in February in the fields.

Cold weather in Europe and Asia contributes to the increased demand for gas and higher prices for the blue fuel. The price tag reaches $ 1000 per 1000 cubic meters in Asia, which forces Russian companies involved in LNG projects to reorient all their resources to the Asian market.

And in the current situation, Gazprom is going to teach Europe a lesson, since there is no talk of any increase in supplies to the West. In Warsaw where the thermometer dropped to minus 26 Celsius, some of the conscious, slightly freezing citizens are already wondering where the promised friendly American gas is, which we have been so heavily advertised for several years. There should be a lot of gas in Poland. It should be cheap.

Oil tends to turn down. In the US last week, an increase in commercial oil reserves was recorded, in addition, the growth in the number of drilling rigs continued. These two factors, under normal conditions, without a series of lockdowns, by themselves were capable of turning the market down. In the current «quarantine» circumstances, despite the OPEC + deal, these two factors only add fuel to the fire. The bulls are unlikely to be able to withstand the selling pressure next week. We are waiting for a pullback to $ 50.00 per barrel for Brent.

The RGBI index continues to fall, what worsens the already alarming situation around the ruble.

The national currency could not cope with the political negativity that comes from Washington and Brussels. The story with Navalny, his arrest, protests on Saturday, all this creates additional pressure on the ruble. The pair chose the way up to 80.00, supposing that we can see a gap up on Monday.

Two consecutive strong blows on the ruble on Thursday and Friday morning, immediately after Biden’s inauguration, are noteworthy. What it is? Collusion? Of course yes. After all, there are no statistics or news in the morning, there is nothing to react to. Everyone just got out of bed and put on soft slippers.

The central event of the next week is the US Federal Reserve meeting on the 27th. Any hint in the press release about inflation in the country will give a boost to the dollar and loosen the commodity market. 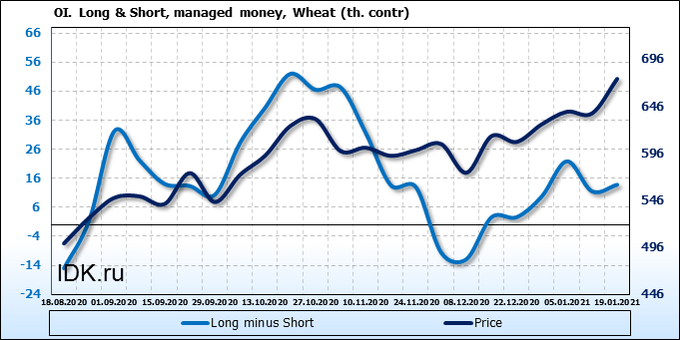 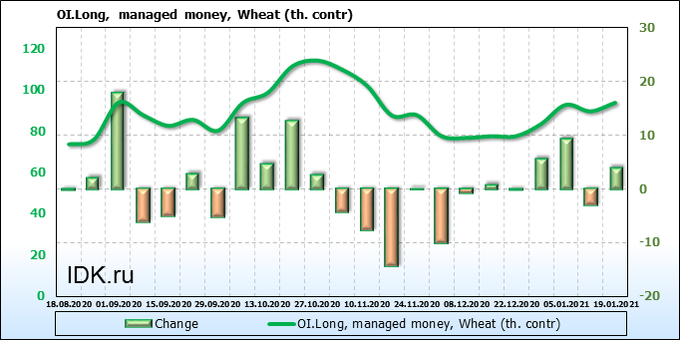 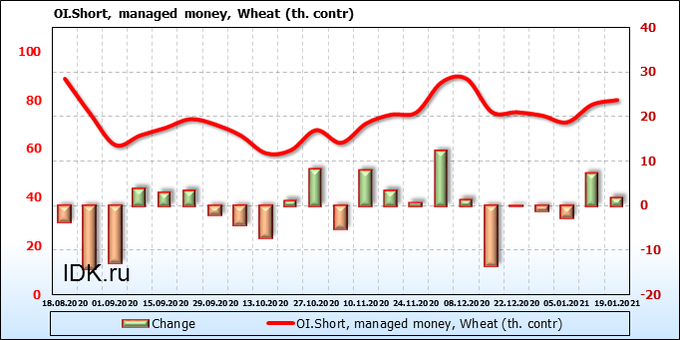 Both bulls and bears increased their presence in the market. On Friday we see that sellers were ultimately more persistent, which led to a fall in prices. We do not exclude a further increase in sales from speculators.

Growth scenario: March futures, expiration date March 12. The red Friday candle is mesmerizing. Long, no shadows. With the breakdown of the aggressive support line. Michelangelo painted worse. We do not buy.

Falling scenario: we will continue to recommend selling, as we did the week before. If after the breakdown of the support line the market rolls back to 655.0, you can sell or build up shorts. Very good if you weren’t knocked out of position last Tuesday. Recommendation: 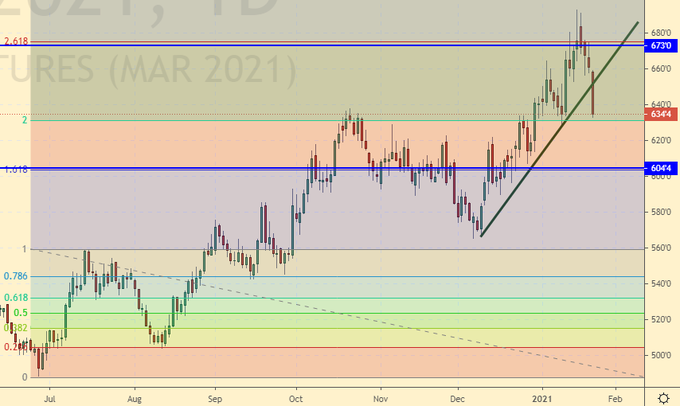 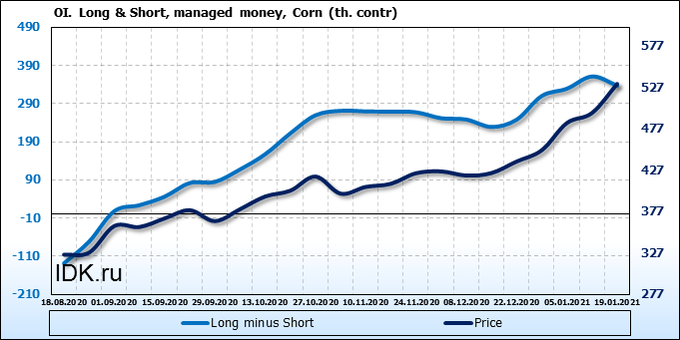 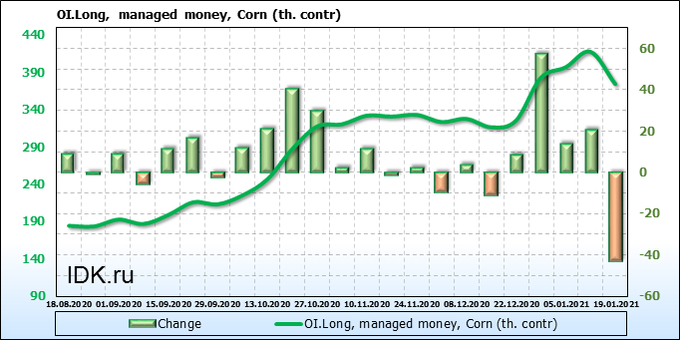 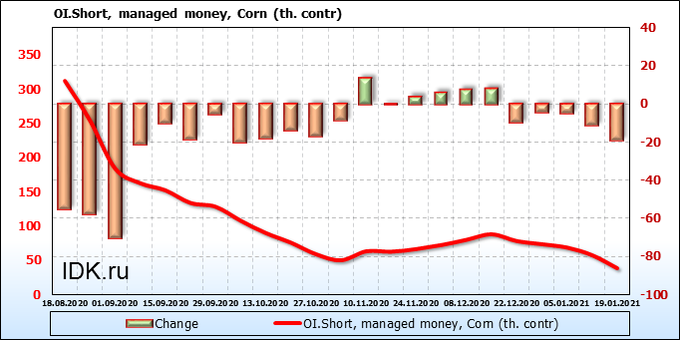 Only sellers fled from the corn market earlier, but now buyers do the same. Considering that prices ultimately went down on Friday, we can expect an increase in sellers’ activity next week.

Falling scenario: we see a beautiful long red candlestick down. In case of a rollback to 515.0, sell. If the fall continues without returning up, do not enter the short. 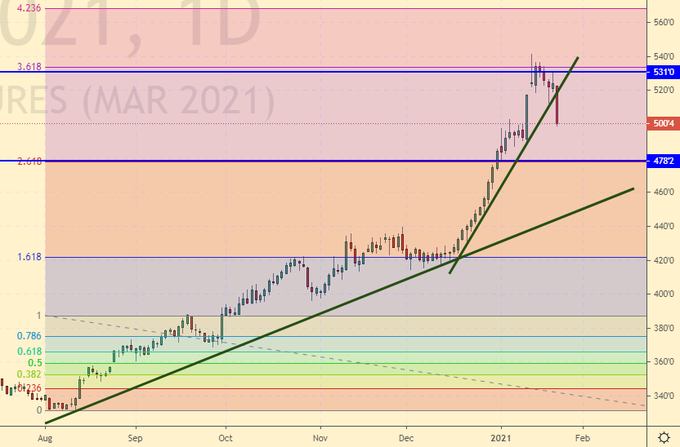 Growth scenario: March futures, expiration date March 12. The market realized on Friday that it was overheated and then fell. In these circumstances, we will wait for the move to the 1210.0 area in order to buy.

Falling scenario: while waiting for a red candlestick, following our recommendations, you could enter short from 1390.0. Now you just need to hold the position counting on the move to 1210.0. 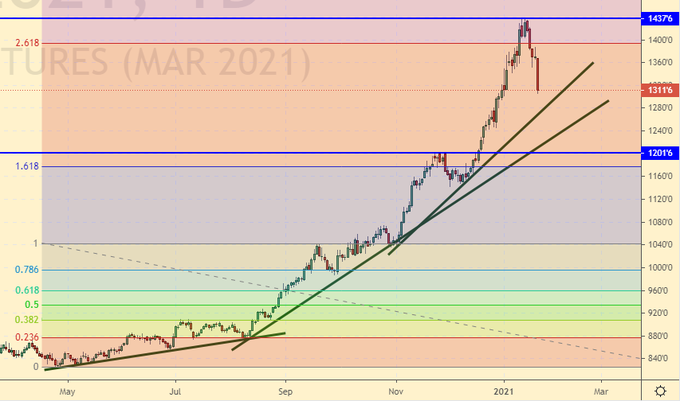 Growth scenario: March futures, expiration date February 26. In the current circumstances, we will expect a rollback to 14.00. The current levels are high. Note that we have not yet reached the target at 17.18.

Falling scenario: if there is a rollback to 16.30 — sell. By 15.00 we are quite capable of getting off without any problems. 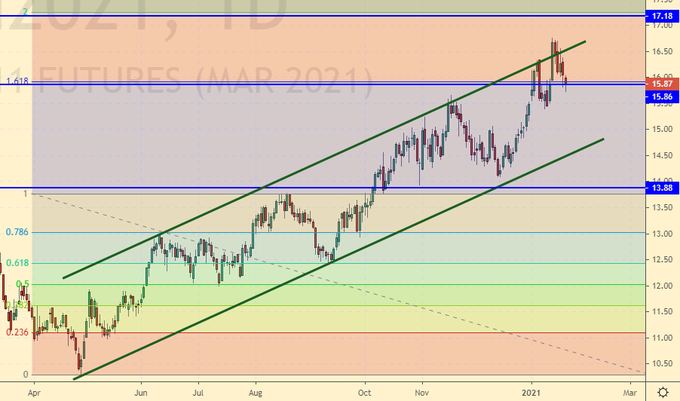 Growth scenario: given the negative sentiment on the agricultural market, we do not buy. It will not be surprising if the quotes return to 100.0.

Falling scenario: sell here. If you are already logged in at the 124.00 touch, then stop. 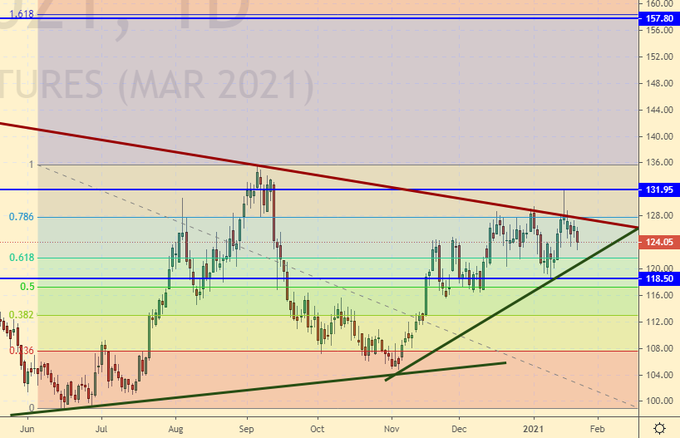 Judging by the open interest, which has hardly changed over the week, there is no idea on the market. There must be a group of daredevils who will strike in one direction or another against the background of some news.

Falling scenario: red Friday gives us hope for a descent to 52.00. You can sell here. Recommendation:

Fundamental US data: the number of active drilling rigs increased by 2 units to 289 units. 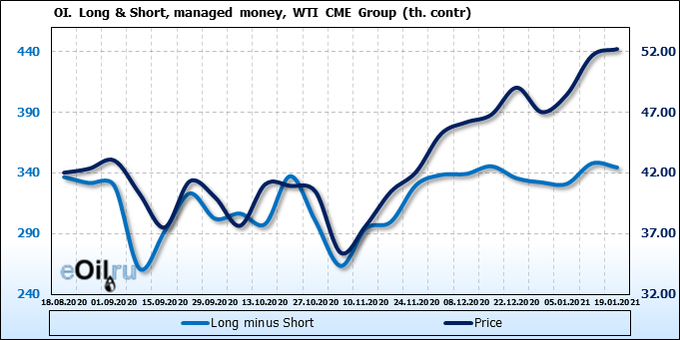 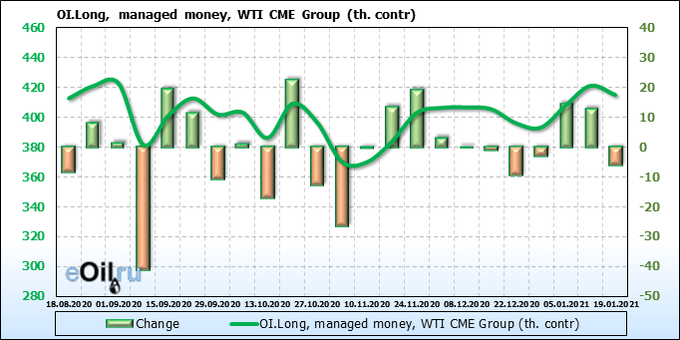 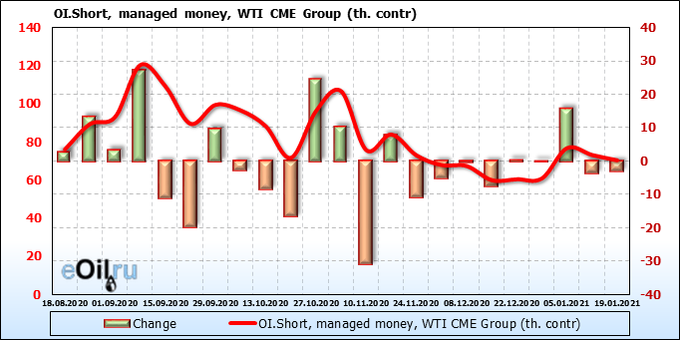 The bulls stopped pushing the market. We see a slight closing of positions. At the same time, sellers are in no hurry to build up pressure. There is uncertainty in the market, apparently before the Fed meeting.

Growth scenario: March futures, expiration date February 22. New local minimum was shown on Friday. We pretend to break the long-term support line. We continue to count on a pullback to 46.00. Do not buy.

Falling scenario: if the market falls below 52.00, you can sell. Those who are already in shorts, hold positions. 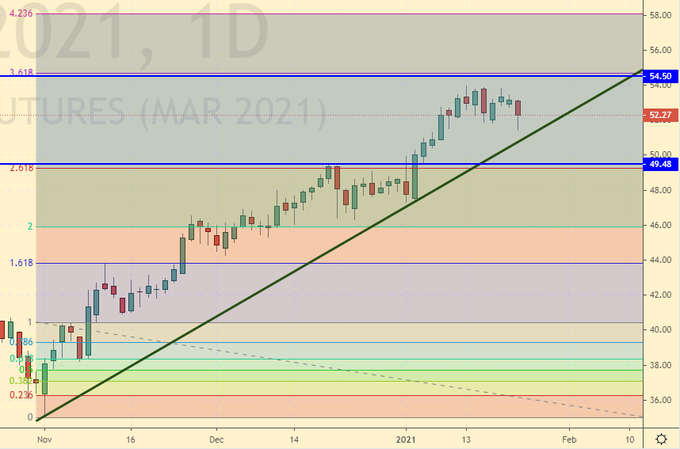 Growth scenario: February futures, expiration date February 11th. We see a break through the support line. We look forward to continued price decline. The current levels for purchases are too high.

Falling scenario: if the market falls below 440.0, you can sell. The long lower shadow of the Friday candlestick raises concerns, so it is better to wait for confirmation.

Sale: no. Think when falling below 440.0. Consider the risks. 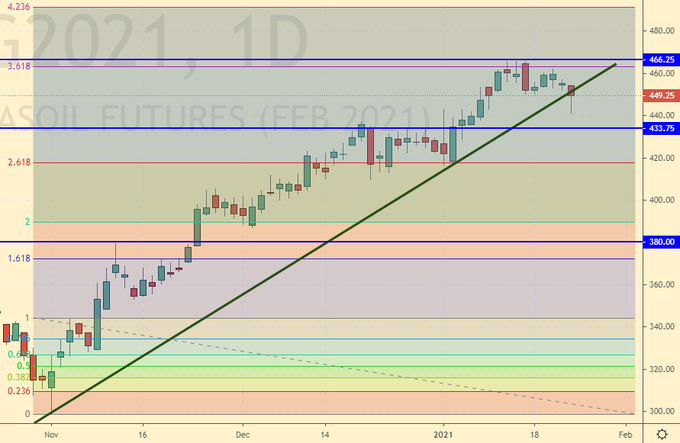 Growth scenario: March futures, expiration date February 24. Here you have to buy. Gazprom did not increase supplies to Europe so that the «partners» would take more from the storage facilities. This maneuver could lay the foundation for price increases.

Falling scenario: do not sell. It’s cold in Europe. 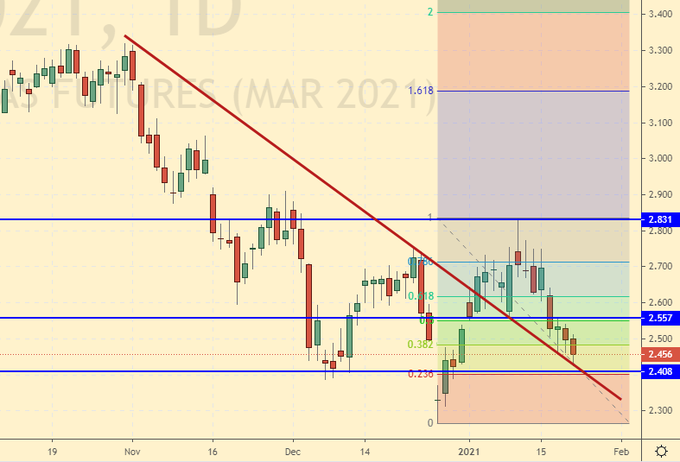 Growth scenario: no growth. However, any options are possible before the Fed meeting on Wednesday. We are unlikely to go below 1800 on Monday and Tuesday. Rather, bidders will wait for the Fed’s press release.

Falling scenario: whoever sold two weeks ago is holding shorts. It makes no sense to open new positions here. Note that the market’s reaction to the Fed meeting is not very predictable. Recommendations: 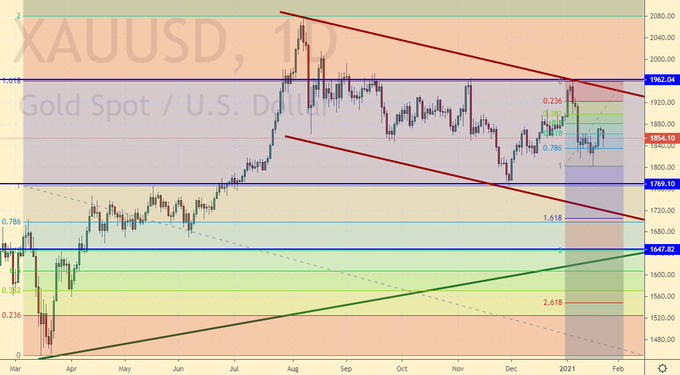 Growth scenario: bulls hold on for now. The move to 1.2700 remains in sight as long as we are above 1.2000. Note that it is best to make buying decisions after the US Federal Reserve meeting. On Wednesday evening we can see false movements.

Falling scenario: it makes sense to hold the shorts for now, especially since the stop is not far away, at 1.2210. If the market goes higher and the position is closed by a stop, we do not open new sales until it falls below 1.2000.

Purchase: while we are above 1.2000, we can consider buying options, but better after Wednesday. 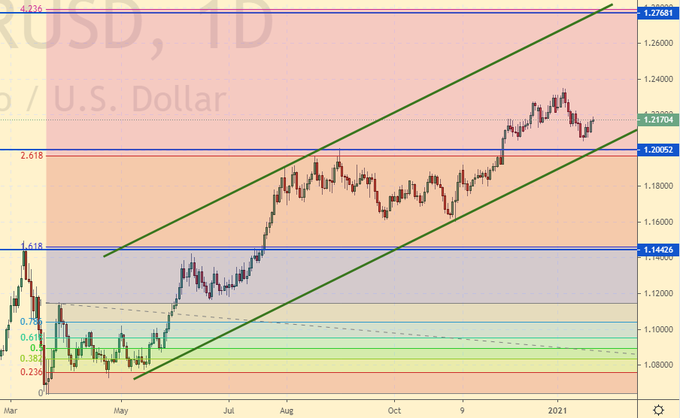 Growth scenario: we see a way out of consolidation upwards. On Monday there may be a gap again upwards by 30-50 kopecks due to the nervous situation about Navalny. Europe demands to release him from custody and threatens with sanctions. Let us also note the positive, the desire of the Americans to extend the START treaty for five years, as the Kremlin proposed, suggests that not all channels of communication with Washington are closed.

Falling scenario: we should probably forget about the movement to 70.00. However, everything could change on Wednesday if the Fed issues a comment similar to the following: “We see no reason to raise the rate even if inflation accelerates, since the economic recovery is in the first place. At this stage, we are not considering the curtailment of quantitative easing and business assistance programs.» That is, there will be a lot of money and it will be cheap. In this case, the dollar may fall. Including the ruble. 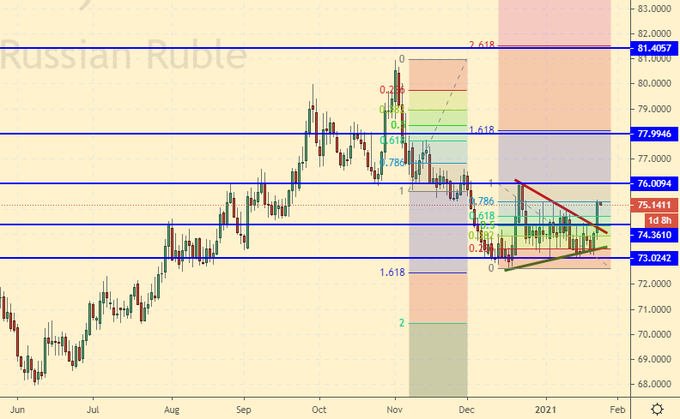 Growth scenario: March futures, expiration date March 18. Prices broke through the support line and went down. Thursday and Friday were extremely unpleasant for the RTS index. Note that the MICEX index, calculated in rubles, also went down. It will be difficult for Russian securities to grow amid political confrontation with Europe and the United States. It is possible that the market will continue to fall on Monday as well. We do not buy. 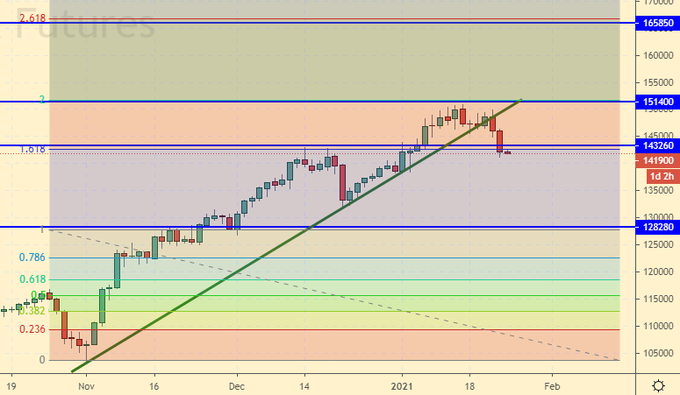